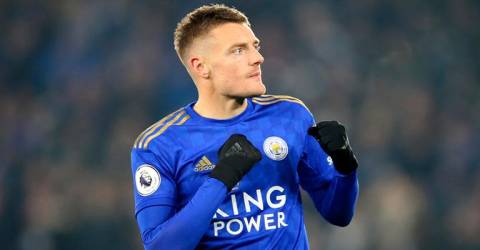 LEICESTER CITY’S Jamie Vardy (pix) said scoring 100 Premier League goals was a massive achievement but its significance would hit home only after his retirement from the game.

The 33-year-old, who netted his 100th Premier League goal in the 3-0 home victory over Crystal Palace earlier this month, became the first Leicester player to reach the milestone.

He also became the 29th player to score a century in the English top flight, with his 103 Premier League goals coming in 210 games, after he debuted in the competition in the 2014-15 season at the age of 27.

“It’s a massive achievement but it’s one of those, ‘yes you’ve done it’, but it’s all about the next game then, so you don’t really get time to have it sink in,” the English striker told the club’s website.

“It’s probably something that, when I finish football, I can look back on it and actually realise what it means.

“The season finishes and you get away to forget about football for a few weeks and then you’re straight back in to start the next season. So it’s all about constantly going and going.”

Leicester host Manchester United in their final game of the season on Sunday which could determine whether they qualify for next season’s Champions League.

Vardy has fond memories of the fixture, having scored his maiden top-flight goal against United in a 5-3 home win in 2014.

“It was massive. We’d just been promoted, all the world-class players they had and so for us to come away winners was really enjoyable,” said Vardy, who has netted 23 goals this season.

Leicester are fourth in the standings with 62 points, level on points with fifth-placed United, who have a game in hand. – Reuters

Dive into the world of gamers