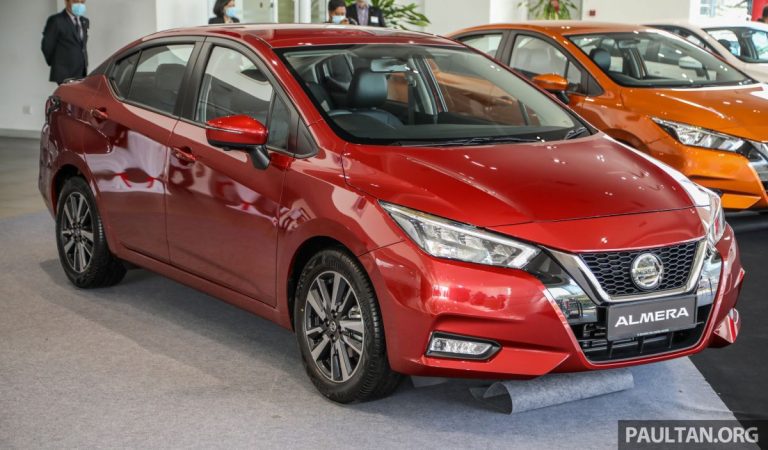 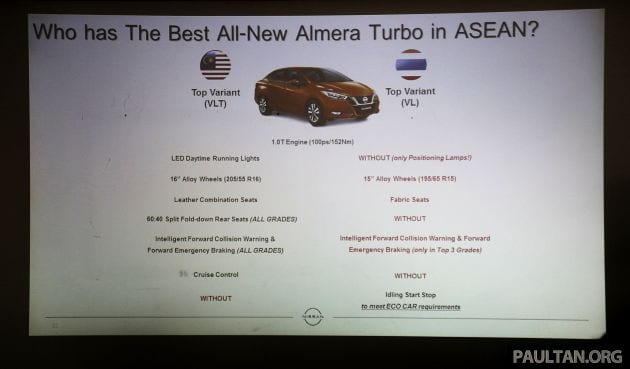 During the product presentation at the 2020 Nissan Almera Turbo preview earlier today, Edaran Tan Chong Motor (ETCM) took the opportunity to highlight the high level of equipment and features on the model from the get-go. In what is a rarity but hopefully will become the norm, the company said that the Almera sold here has the highest specifications levels in the ASEAN market.

It compared its top-of-the-line VLT variant with the range-leading VL sold in Thailand, the market that debuted the second-gen N18 in the region. By and large, the two versions are identical in terms of equipment levels, with items such as a semi-digital instrument display with a seven-inch colour screen and a Nissan Connect infotaiment system with eight-inch touchscreen display found on both cars.

However, the Malaysian VLT has a couple of features not found on the Thai-market VL, namely a cruise control system and 60:40 split foldable rear seats. The local car also has a higher level of equipment in a few areas, specifically in the form of its leather upholstery (fabric in Thailand), LED daytime running lights (halogens in Thailand) and its machined two-tone 16-inch alloy wheels (a size up from the 15-incher equipping the Thai VL model).

As it is in Thailand, only a single engine option is available for the Almera, and that’s a HR10DET (designated the HRA0 in Thailand) 1.0 litre turbocharged three-cylinder petrol engine offering 100 PS at 5,000 rpm and 152 Nm of torque from 2,400 to 4,000 rpm. The mill is paired with an Xtronic CVT with D-Step Logic and Sport mode.

Malaysia will have three variants of the Almera, a baseline VL grade, a mid-spec VLP and the aforementioned VLT. Bookings for the car open tomorrow (September 5), and estimated prices start at RM8x,xxx for the VL, RM8x,xxx for the mid-VLP model, and RM9x,xxx for the VLT. We’ve detailed all the specifications and equipment on all three Nissan Almera Turbo variants in our earlier post, which you can find here. Also, we’ve made some quick driving observations about the car, which you can view in the video below.