The Proton X50 is now official! National carmaker Proton has teased its upcoming crossover in its 2020 Merdeka video, showing a blue example along with the rest of the current product range. Finally, the automotive industry’s worst kept secret is out.

A few quick cuts show off the X50’s side profile, quad tailpipes, LED headlights with daytime running lights and the round Proton logo. Look closely enough and you’ll even spot red highlights on the front grille and the brake callipers. The wheels match the 18-inch items found on the Geely Bin Yue/Coolray in other markets.

This also confirms we are getting the “Sport” version of the crossover (it’s available with two distinct faces in China, this being the more aggressively-styled look), as seen in the frontal shot and of course, the quad pipe close-ups. Interestingly enough, the teaser car wears a body-coloured roof setup instead of black, although the floating roof look is still in play with the blacked-out C-pillars.

There are no specifics released just yet, but the Proton X50 is likely getting the 1.5 litre, direct injection turbocharged three-cylinder petrol engine with 177 hp and 255 Nm of torque, paired with a seven-speed dual-clutch transmission as available in both China and the Philippines. The 0-100 km/h time as claimed by Geely is 7.9 seconds. 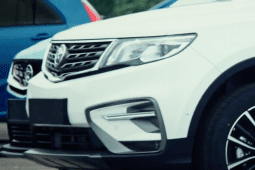 Built on the modular BMA platform, the X50 is expected to be offered with class-leading safety features. Six airbags and electronic stability control will be standard, while the upper variant(s) are likely to have autonomous emergency braking (AEB) and even adaptive cruise control (ACC) with active lane keep assist, surpassing even its bigger sibling, the X70.

Now that Proton is actively teasing the X50, the launch should be planned for the next month or two, matching the Q4 2020 timeline indicated earlier. Based on the response online, it couldn’t come early enough, really. Now that it’s all official, we’ll be waiting for the specs an the all important prices with bated breath. Selamat Hari Merdeka, everyone!