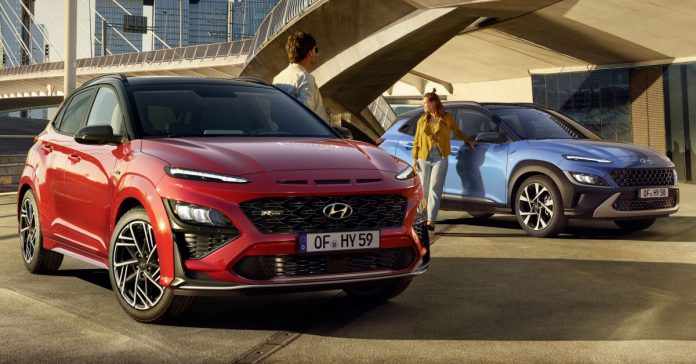 Not impressed by the performance of the naturally-aspirated facelifted Hyundai Kona? Well, good news, because Hyundai-Sime Darby Motors has announced that the 1.6 Turbo model will be launched soon, with the order books now open for the forced-induction B-segment SUV.

The car will be offered in standard and N Line variants, both powered by the same 1.6 litre turbocharged four-cylinder petrol engine. Now christened the Smartstream G1.6, it has been upgraded from its previous iteration with Continuous Variable Valve Duration (CVVD) and makes quite a bit more power than before.

Outputs have gone up 21 PS to a hot hatch-rivalling 198 PS at 6,000 rpm, while peak torque holds steady at 265 Nm from 1,800 to 4,500 rpm. Despite the extra power, the car gets from zero to 100 km/h in exactly the same time as before, at 7.7 seconds. A seven-speed dual-clutch transmission remains the sole gearbox option for this engine, sending drive to the front wheels. Few other details have been released so far, but seeing as the two variants will sit at the top of the lineup, they will almost certainly be packed with equipment, above and beyond what the 2.0 Active already offers. The N Line will be differentiated by a more aggressive bodykit, similar to BMW’s M Sport package.

Changes over the standard Kona include a sportier front fascia with larger air intakes, a silver front splitter and bumper corner fins, plus triple fake inlets above the grille. The grille itself features Y-shaped inserts reminiscent of recent N models, while the intakes get a unique honeycomb mesh.

The N Line also gets sharper side skirts and a revised rear bumper with a large diffuser-like insert, dual visible exhaust pipes, fake corner vents and fins that are said to improve airflow detachment. The body mouldings around the car have been painted in body colour for a cleaner look. Rounding off the exterior changes are the unique turbine-style 18-inch two-tone alloy wheels. Inside, the N Line is differentiated from the standard car through red seat stitching, metal pedals, an upright gearknob with red striping and N logos on the steering wheel, gearknob and seats. Black cloth, leather and suede upholstery options are available, although it’s still unclear which one we’ll get.

The Active also comes with a door opening warning and a rear seat reminder, but not adaptive cruise control, which is available in other markets. Perhaps the Turbo variants will be the first Malaysian-market models to get it, given that the they are expected to come with a significant price premium over the Active, which retails at RM136,888 on-the-road without insurance.

Cops say they are not investigating Dr M