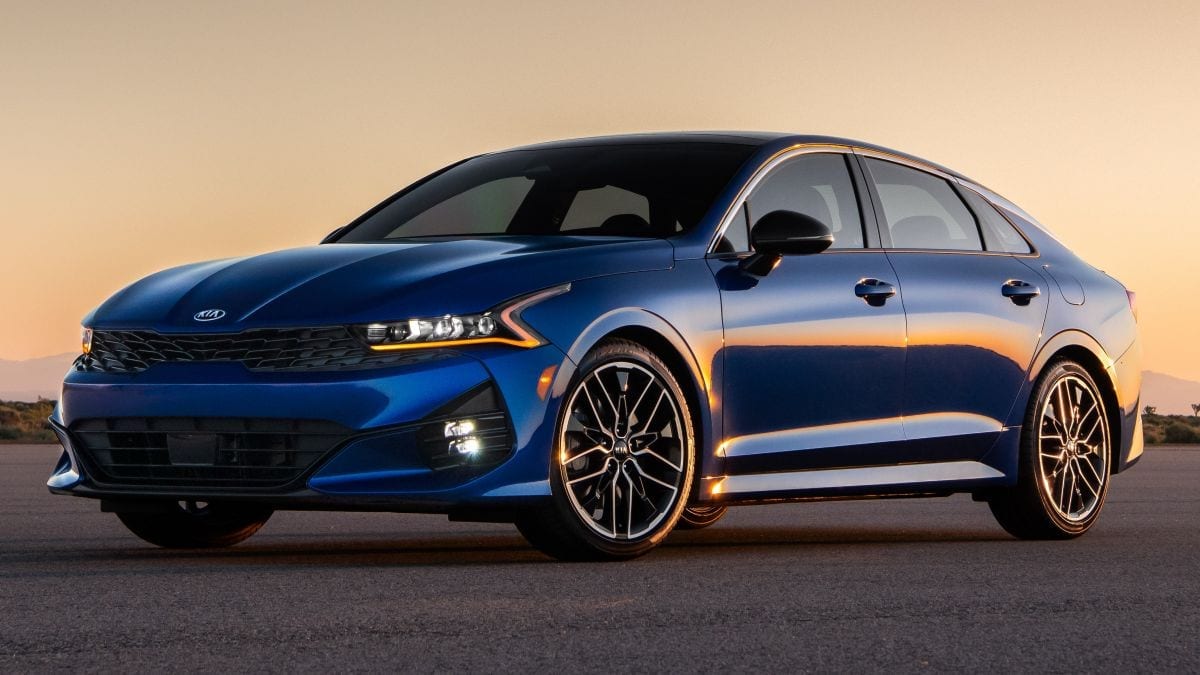 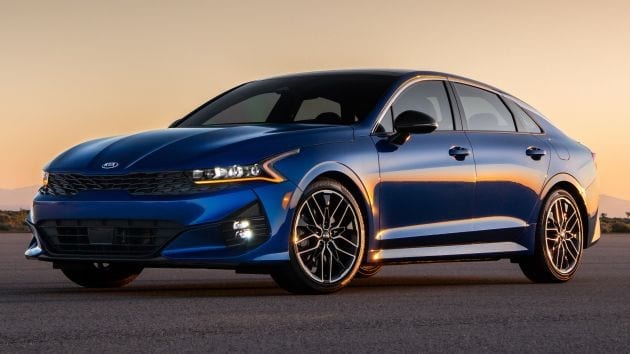 The Optima is dead, long live the K5. With the launch of its latest D-segment sedan in the United States, Kia is ditching its longstanding international nameplate and taking its domestic market moniker overseas. That’s to be expected, given that the fifth-generation model is a massive stylistic leap over its predecessor.

Striking and divisive rather than being conservatively handsome, the new Kia K5 features a more extreme version of the Optima’s fastback design. At the front is a bold reimagination of the “tiger nose” grille, which is wider and thinner, extending all the way into the headlights. The lamps themselves are slimmer, with a unique Y shape and “Heart Beat” LED daytime running lights.

Along the side, the roofline is sleeker, thanks to the 20 mm reduction in height to 1,445 mm; the car is also 20 mm longer (4,905 mm) and 25 mm wider (1,860 mm) with a 45 mm longer wheelbase (2,850 mm). The Optima’s distinctive chrome strip – where the windows and rear windscreen intersect – has been retained, but it has been extended and now wraps around the lower edge of the windscreen. A gloss black rear applique extends the windscreen, enabling designers to enhance the fastback profile while maintaining luggage space. 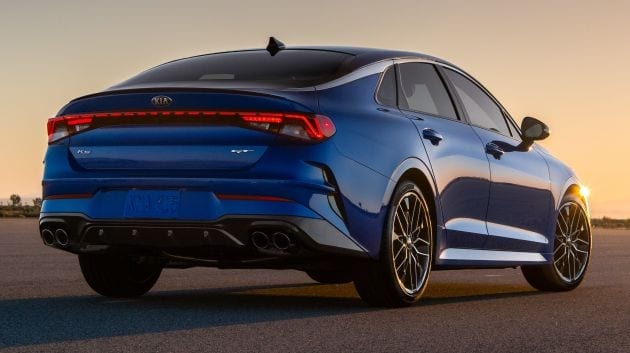 The tail lights mirror the shape of the headlights and daytime running lights, their full-width design enhanced by optional LED “dashes” that run across the boot lid. Range-topping GT Line models get more aggressive front and rear bumpers, a shark skin-inspired grille mesh and twin trapezoidal tail lights, and buyers can also opt for wheels measuring 16, 18 and 19 inches in diameter.

Inside, it’s a much calmer environment, with a no-nonsense horizontal dashboard and a Mercedes-aping instrumentation and infotainment unit. There are satin chrome and faux wood finishes depending on the variant, along with the option of red faux leather upholstery, a panoramic glass sunroof and a flat-bottomed steering wheel on GT Line variants. 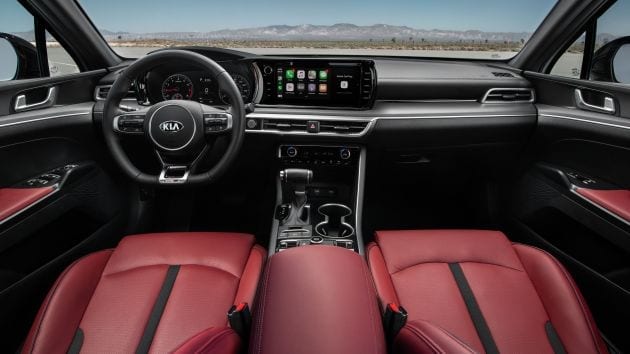 So too is an improved (and now cooled) wireless smartphone charger, voice control with natural language recognition, and wireless Apple CarPlay and Android Auto connectivity. Confusingly, that last feature isn’t offered with the top navigation system, which persists with a wired connection. You can also get the car with remote engine start, climate control pre-conditioning and a handsfree opening boot lid.

Under the skin, the K5 rides on the third-generation N3 platform, allowing for the larger and lower dimensions. The car also gets optimised suspension geometry to improve handling and stability, along with increased average tensile strength and additional hot-stamped parts for a more solid body. Refinement has also been improved through the used of better noise insulation and a standard acoustic windscreen. 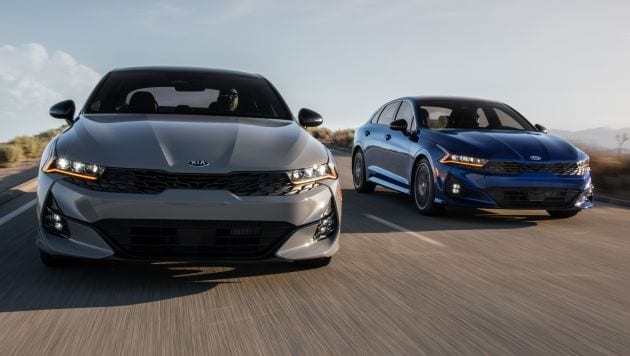 In America, the K5 will be offered exclusively with turbocharged engines, with the standard mill being a 1.6 litre Smartstream G petrol four-cylinder that makes 180 hp and 264 Nm of torque. Equipped with an industry-first Continuously Variable Valve Duration (CVVD) system, it is paired to an eight-speed automatic gearbox. All-wheel drive will be offered with this engine for the first time, as an option.

Later in the autumn, enthusiasts will be able to get their hands on the GT. This one gets powered by a 2.0 litre that churns out 290 hp and 422 Nm, routed to the front wheels through a new eight-speed wet dual-clutch transmission. Performance credentials include a zero-to-60 mph (97 km/h) in 5.8 seconds.

Ismail Sabri: Govt will continue ensuring well-being of those with disabilities

Football: Olympics-Soccer-Germany walk off in friendly after alleged racist abuse