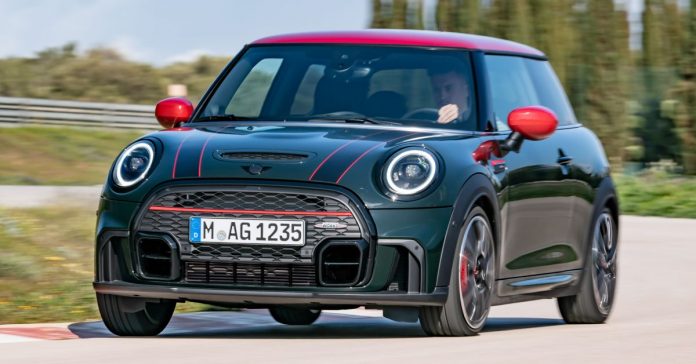 Having introduced the second facelift for the F56 MINI Hatch lineup early last month, MINI Malaysia has now launched the sportier John Cooper Works version here. The hot hatch receives all the visual upgrades found on its lesser siblings while adding a heap of extra performance.

That performance doesn’t come cheap, however, as the JCW model retails at RM303,289 on-the-road without insurance, inclusive of the sales and service tax (SST) rebate and a two-year warranty. Add the four-year, unlimited-mileage warranty and service package and the figure jumps to RM311,259. Those prices represent a marginal increase of less than RM500 over the outgoing car. The aesthetic tweaks mirror the rest of the range and includes a giant six-point front grille, darkened headlight internals, revised side scuttles and a redesigned rear bumper. The JCW-specific additions are even more extroverted this time around, consisting of sizeable nacelles on either side of the grille, vertical corner air inlets, a large rear wing and an absolutely massive rear diffuser surrounding the twin centre-exit exhausts.

Still measuring 8.8 inches across, the centre touchscreen is now linked to the latest infotainment operating system with support for Live Widgets. The centre armrest also incorporates a new Qi wireless smartphone charger, while a head-up display and a 12-speaker Harman Kardon sound system continue to be fitted. Under the skin, the adaptive dampers have been retuned and possess more than 10% greater damping force than before. Large disc brakes with red JCW-badged callipers hide behind 18-inch JCW Circuit Spoke two-tone alloy wheels, wrapped in run-flat tyres.

One big upgrade concerns safety. Like all the latest MINI models sold in Malaysia, the JCW now comes with the Driving Assistant package, which adds autonomous emergency braking and lane keeping assist – the latter is new for the MINI Hatch lineup for 2021. Six airbags, stability control and ISOFIX child seat anchors on the front passenger seat continue to be part of the standard specification.