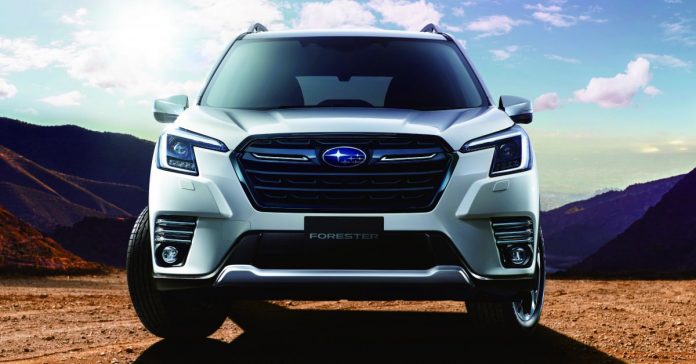 Subaru has given the fifth-generation Forester its first mid-cycle refresh, more than three years after the SUV first made its global debut. Pre-orders for the refreshed SUV will begin in Japan this August, with customers being able to choose from four trim levels – Touring, X-Break, Advance and Sport.

The main styling changes are seen at the front, as the Forester sports new headlamps that are more upright and angular in design. Each cluster features a trailing bit that points towards a more prominent grille, which has a new insert within its hexagonal shape.

The bolder look is further accentuated by a front bumper that slightly protrudes just below the lighting clusters, while the rectangular-shaped sections for the fog lamps carry a new multi-slat insert within them – the Sport variant gets its own design here.

The lower intake gets a slight tweak to provide more visual depth as well, with the bumper guard now layered on top of the frame that anchors the base of the bumper. As for the rear, it appears to remain unchanged from the pre-facelift model, as the C-shaped taillights and lower apron are carried over. The same applies to the interior, with the general layout of controls and equipment being the same, although there are some new trim and upholstery options, depending on variant. As for engines, the Touring, X-Break and Advance trim levels all come with Subaru’s e-Boxer hybrid powertrain as standard. This consists of an FB20 2.0 litre naturally-aspirated flat-four engine that drives all four wheels via a Symmetrical All-Wheel Drive system, with the hybrid component being an electric motor placed within the Lineartronic CVT.

The e-Boxer variants also receive an active front grille shutter and a feature called e-Active Shift Control, which senses the acceleration and G forces of the car to ensure the engine speed provides improved acceleration feel, or to improve engine braking on a hill descent. In terms of equipment, the Touring and X-Break variants come with 17-inch alloy wheels, while the Advance and Sport are fitted with larger 18-inch units instead. Other available features include X-Mode, LED headlamps with steering-follow function, fabric or leather upholstery, a powered sunroof.

All variants also come standard with Subaru’s EyeSight suite, which the company says has wider operating ranges and utilises a revised stereo camera setup with an expanded field of view. The safety and driver assist systems the are included are autonomous emergency braking, adaptive cruise control, false start suppression control as well as lane departure warning and assist.