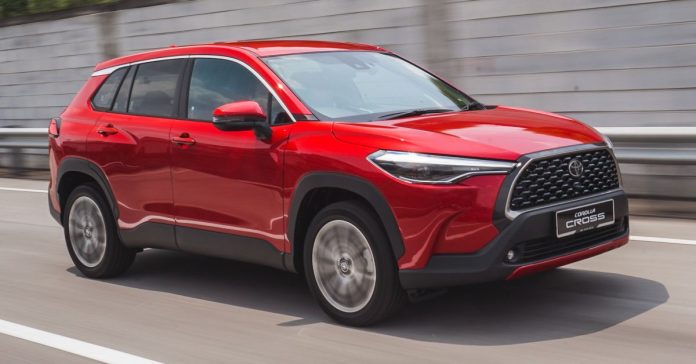 When the Toyota Corolla Cross was launched in March, the released prices were RM124,000 for the 1.8G and RM134,000 for the range-topping 1.8V. The RM124k for the base variant was with SST exemption, but the RM134k price tag for the 1.8V had sales tax included.

This is because the Corolla Cross 1.8V was only expected to be delivered in the second half of 2021, and SST exemption was supposed to end on June 30. Earlier this week, the government announced an extension for the SST waiver, which will now end on December 31, 2021. This means that the Corolla Cross 1.8V needed a new price, one without SST – it’s now revealed to be RM129,266, or RM4,734 cheaper. The 1.8G stays at RM124k.

By the way, the Corolla Cross receives 50% SST waiver as it’s a CBU import from Thailand. CKD locally assembled models get the full 100% exemption. UMW Toyota Motor has already revealed plans to CKD the Corolla Cross at its Bukit Raja plant, making it the first TNGA-based model to be assembled in Malaysia. That will happen later this year.

The Honda HR-V rival is powered by a 1.8 litre naturally aspirated engine with Dual VVT-i. The 2ZR-FE develops 139 PS at 6,400 rpm and 172 Nm of torque at 4,000 rpm, with drive sent to the front wheels via a CVT. The auto ‘box has seven virtual speeds in Sequential Shiftmatic mode.

For many buyers, the 1.8V is where it’ll start. The 1.8G looks rather underwhelming with halogen projector headlights and 17-inch wheels. At least there’s blind spot monitoring, rear cross-traffic alert, a tyre pressure warning system, seven airbags, plus front and rear parking sensors. A 360-degree surround view camera, dashcam and powered tailgate with kick sensor are standard across the board, too.

WhatsApp inches forward on bringing Reactions to its app