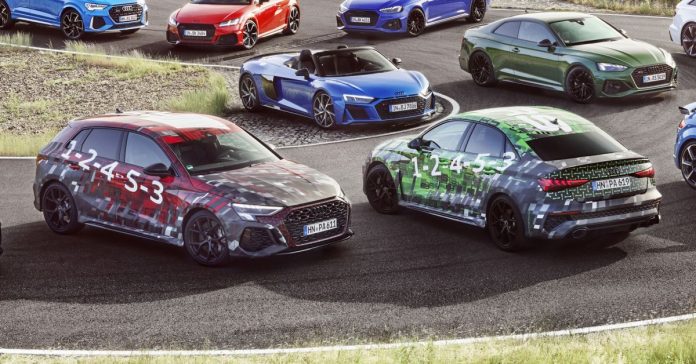 Audi has released official preview images of its new RS3 hatchback and sedan, with both models expected to make their debuts soon. Featured with the entire Audi Sport range, the RS3 duo are seen in production-ready form, albeit with some camouflage that bears “1-2-4-5-3.”

That sequence of numbers is a reference to the firing order of the company’s five-cylinder engine, which suggests the continued use of a 2.5 litre turbocharged unit found in the current RS3. As it stands, the mill provides 400 PS (394 hp) and 480 Nm of torque, although these figures could be bumped up to compete against the mouthful Mercedes-AMG A 45 S 4Matic+.

The five-cylinder engine will likely be paired with a dual-clutch transmission and standard quattro all-wheel drive, which should get the car from a rest to 100 km/h in around four seconds. That puts it within close proximity to the Mercedes-AMG model that completes the century sprint in 3.9 seconds.

As for styling, the car largely mimics the S3 pair that were revealed last year, but with noticeable modifications like a more aggressive front end, model-specific alloy wheels, a more pronounced rear diffuser, a lip spoiler on the boot and the obligatory dual oval exhausts instead of four circular ones. Less obvious changes like unique interior cues and beefier brakes are expected as well. Audi’s casual reveal ties in with an interview with Sebastian Grams, Audi Sport’s managing director, and Rolf Michl, the company’s head of sales and marketing, where they discuss on the sustainable future of the brand’s performance models.

“We expect to offer more than half of our high-performance models in partially or fully electrified form as early as 2024. And by 2026, this figure will likely even be as high as 80%. We want to offer our customers the right products and services for their specific markets and segments,” commented Michl. He added that the company sees a “significant potential” in the high-performance SUV segment, and by 2030, all Audi Sport models will be either plug-in hybrid or fully electric.