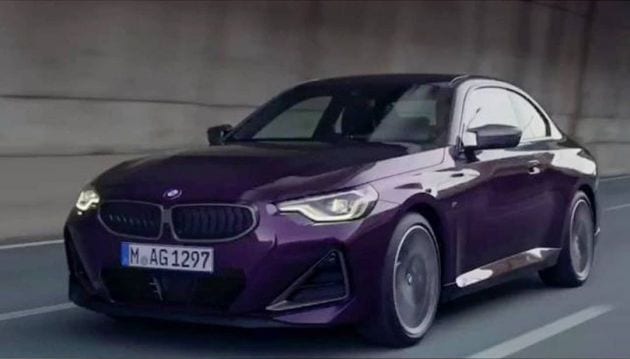 The latest in the trickle feed of information on the next-generation, 2022 BMW 2 Series Coupe comes in the form of this image, which appears to be a leaked image ahead of the compact coupe’s official debut later this week.

Sighted on the wilcoblok Instagram profile, the forthcoming model tipped to bear the G42 codename is set to debut at this week’s Goodwood Festival of Speed. A selection of three-, four- and six-cylinder engines is expected to feature in the line-up, while diesel options have been tipped to make a return to the fold.

The six-cylinder version will be represented by the M240i xDrive with the B58 turbocharged inline-six petrol engine packing 374 PS, and this will be paired with an eight-speed Steptronic Sport automatic transmission, all-wheel-drive and an M sports differential on the rear axle. Earlier reports have indicated that this will be joined by the 220i, 225i (for selected markets), 230i and the 220d diesel. Topping the 2 Series range eventually will be the fully-fledged M2, set to exceed 400 PS in maximum output courtesy of a G80 M3/G82 M4-derived S58 inline-six turbocharged engine.

Spyshots from last August also offered a glimpse into the 2 Series cabin, where its dashboard can be seen to take after the architecture used in the G20 3 Series, reflecting its use of the RWD-based Cluster Architecture (CLAR) underpinnings.

This is in contrast with the FWD-based FAAR platform used for other models wearing the 2 Series nameplate, like the F44 2 Series Gran Coupe, F45 2 Series Active Tourer and the F46 2 Series Gran Tourer which won’t get a full-blown M version as BMW M president Markus Flasch remarked that front-wheel-drive is not suited to high-performance M models.

If this metallic purple example does turn out to be the genuine article, what do you think of the forthcoming 2022 BMW 2 Series Coupe?