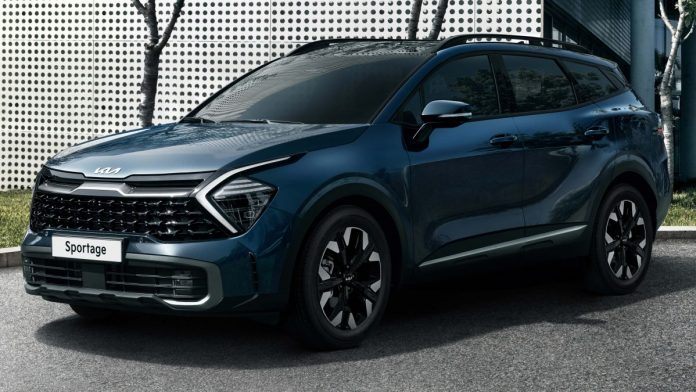 Last month marked the introduction of the new fifth-generation Kia Sportage, debuting a highly radical design direction for the brand. At the time, there were just a few photos and a smattering of details regarding the aesthetics, but since then, the Korean carmaker has revealed the engines and technologies that will feature in the SUV, as pre-orders begin in the republic.

At launch, the Sportage will be available with a choice of two internal combustion engines, both mildly updated versions of those found in the outgoing model. The 1.6 litre TGDI turbocharged four-cylinder petrol engine is now more fuel efficient, thanks to optimised combustion, improved cooling and reduced friction, with measures that include a new integrated thermal management system and low-friction ball bearings.

The result is a slight increase of power to 180 PS, although peak torque holds station at 265 Nm. Fitted with a seven-speed dual-clutch transmission (a six-speed manual is also available), the engine is capable of producing a combined fuel consumption figure of 12.5 km per litre.

Also available is a 2.0 litre diesel, featuring a variable geometry turbocharger, solenoid valve control a variable-capacity oil pump, an electric thermostat and optimised lubrication and cooling. Power has again marginally increased to 186 PS, while torque has gone up 17 Nm to 417 Nm. Fuel consumption is rated at 14.6 km per litre when fitted with standard front-wheel drive. An eight-speed automatic gearbox is fitted as standard here, featuring a damper-controlled multi-disc torque converter for a wider lock-up range, plus a new structure that reduces oil leaks and improves control stability and shift response. The diesel is also the only one to offer the option of a variable all-wheel-drive system, which comes with a new Terrain Mode with auto, snow, mud and sand settings. Later on, there will be a hybrid model utilising the 1.6 litre turbo engine, as well as a plug-in hybrid variant.

Riding on the Hyundai’s third-generation N3 architecture, the Sportage is claimed to marry a comfortable and stable ride with agile handling. It continues to be fitted with MacPherson strut front suspension and a four-link rear axle and is now available with optional adaptive dampers. Hybrid models will also get Kia’s new E-Handling system to further increase agility and stability on corner entry and exit.

Measuring 4,660 mm long, 1,865 mm wide and 1,660 mm tall, the new Sportage is much larger than before – 180 mm longer, 10 mm wider and 25 mm taller to be exact, plus an 85 mm longer wheelbase at 2,755 mm. This makes the car far more competitive against rivals like the Honda CR-V and Toyota RAV4, although, like the Hyundai Tucson, there will also be a short-wheelbase variant for those used to the old car’s size.

Kia says that the increase in size has enabled to Sportage to now offer class-leading rear legroom (1,050 mm), headroom (1,000 mm) and luggage space, the boot now able to fit an impressive 637 litres according to the VDA’s measuring standards. Still a five-seater, the Sportage has one-touch folding rear seats to make loading larger items a cinch. The design of the Sportage was a major talking point during the car’s unveiling, and a month on, it still looks like nothing else on the road. Sporting Kia’s new Opposites United design language – first seen on the electric EV6 – the new model has a very distinctive front end with a gaping full-width grille, as is seemingly becoming the norm in the automotive industry today.

Sitting either side of the massive opening are the boomerang daytime running lights that form the boundaries of the diamond-shaped matrix LED headlights; they are joined together by a slim silver “tiger nose” graphic along the upper edge of the grille. The sides of the car are much simpler, with subtle front wheel arch bulges and prominent rear haunches adding a hint of muscle to the design.

The upswept chrome window strip, meanwhile, kicks up at the rear and takes up the entire width of the D-pillars, stopping just below the tops of the windows to create an in-vogue “floating roof” look. This is accentuated by the large rear spoiler and, for the first time on a Sportage, a black roof option. Moving to the back, the fast windscreen rake leads onto a short deck, under which sit trapezoidal taillights with “tails” that extend into the sides, reminiscent of the Stinger. Available options include 17-, 18- and 19-inch wheels, plus a sporty GT-Line model and a new X-Line package that adds rugged front and rear bumper designs, silver skid plates and roof rails.

Inside, the Sportage’s modern cabin is dominated by a huge curved display panel, framed by the bracket-shaped full-width air vents. Both instrument and infotainment screens measure 12 inches across and feature the latest TFT LCD technology for precise and clear graphics. Kia is boasting an intuitive, easy-to-use interface and over-the-air software and map updates.

The company also says that the centre console has been optimally positioned for both driver and front passenger, offering storage, touch-sensitive switches and cupholders. A raised platform also holds some soft-touch buttons and a rotary gear selector, while a high-speed Qi wireless charger is also offered. Kia claims that it used the highest-quality materials throughout and is offering some daring colour options, including a sage green for the X-Line that is matched to quilted seats and “black metal wood” trim. There are also slimline front seats that “combine innovation and comfort” as well as an eight-speaker Harman Kardon sound system (badged as Krell in Korea).

Safety-wise, the Sportage comes with new safety restraints (including the airbags) and a light yet stiff body structure, said to offer high levels of torsional rigidity. It also comes with all the latest driver assistance systems, including autonomous emergency braking with pedestrian and cyclist detection and Highway Driving Assist (HDA) Level 2 semi-autonomous driving functionality – the latter utilising a new adaptive cruise control system that adjusts the speed based on navigation data.

Other safety features include blind spot monitoring and collision avoidance, blind spot cameras and Remote Smart Parking Assist (RSPA) that allows you to remotely park into or exit a spot from outside the vehicle. Pricing in Korea ranges from 24.42 million won (RM89,500) to 31.85 million won (RM124,100).

A boon for civil servants