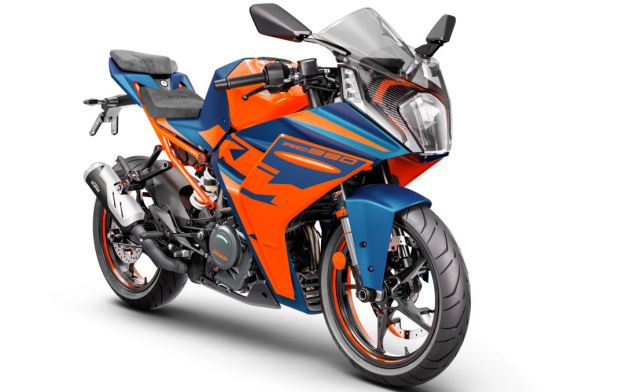 After an absence of a few years with no updates, the 2022 KTM RC sports bike range is back in the international market, comprising of the 2022 KTM RC390 and the KTM RC125. No mention of a KTM RC250, which will compete against market segment rivals like the two-cylinder Yamaha YZF-R25 (RM19,998) and Honda CBR250RR (RM25,999), but we assume the Mattighofen motorcycle maker won’t be leaving this market niche unfilled for long.

A new exhaust system combining stainless steel headers and aluminium exhaust end can saves weight over the previous model. Power goes through a six-speed gearbox equipped with a slipper clutch and the KTM Quickshifter+ allows for clutchless up-and-down shifts. 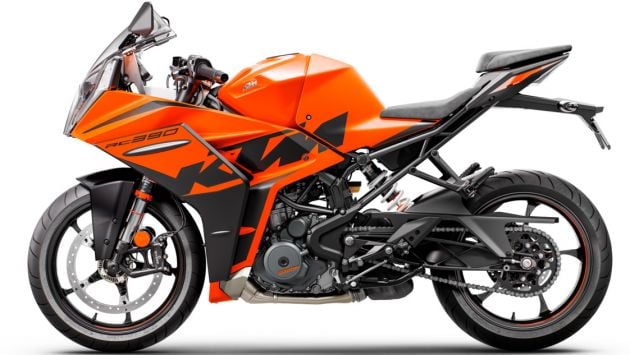 Following the design of the KTM 390 Duke, both the RC390 and RC125 are fitted with a full-colour TFT-LCD display with ambient light detection and connectivity to the rider’s smartphone for managing music and calls. LED lighting is used throughout, following KTM’s design language in the bigger motorcycles in the range such as the KTM 1290 Super Duke R and KTM 390 Duke with the headlight coming with DRLs.

Bodywork on the RC390 takes on a purposeful, aggressive look, inspired by the GP16 MotoGP race motorcycle with two colour options available. Aerodynamics now plays a large part in the RC390s fairings with Computational Fluid Dynamics (CFD) modelling used to improve engine heat management and channel hot air away from the rider.

With an eye to ease of maintenance, bodywork now features an easy to remove design, achieved by reducing the number of screws and fasteners used. The bodywork itself is narrower in the knee area, allowing for easier rider movement on the track while the slimmed down rear section gives a cohesive silhouette to the RC390, a thicker pillion seat improving passenger comfort.

In the suspension department WP Apex upside-down 43 mm diameter forks are used, coming with compression and rebound damping adjustment in the left and right fork legs, respectively. At the rear, the WP Apex monoshock comes with five-steps of rebound adjustment.

Braking is done with Bybre, Brembo’s house brand, which are now lighter by 960 grammes over the previous RC390 and more powerful. The front calliper is a four-piston, radially-mounted Bybre unit clamping a 320 mm disc while a single-piston calliper grabs a 230 mm disc at the rear with adjustable brake and clutch levers are standard.