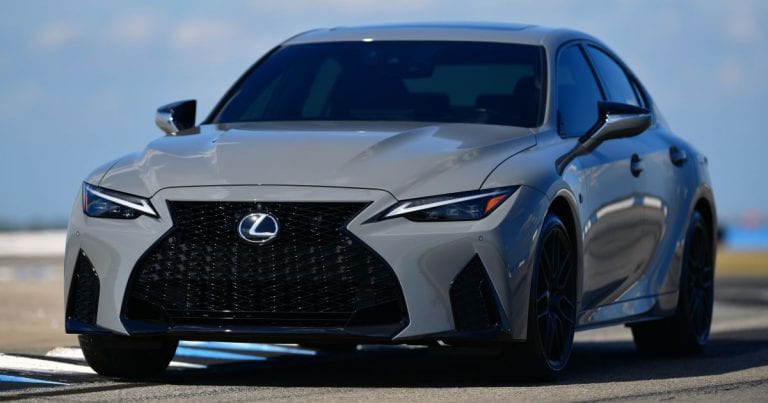 The all-new 2022 Lexus NX and IS 500 Performance Launch Edition models are set to make their first ever public appearance at the Chicago Auto Show, which takes place from July 15 to 19. The pair will be displayed alongside all Lexus models currently on sale in the US, including the newly announced RX L Black Line special edition.

Now, the IS 500 Launch Edition is pretty much a souped up IS 500, but adds a flat grey Incognito paint finish, 19-inch lightweight BBS alloy wheels, black and grey Ultrasuede upholstery, a silver ash wood-trimmed steering wheel, exclusive instrument display startup animation and a serialised badge on the centre console. Just 500 units will be built, all of which are for the US market. Mechanically, it’s powered by the automaker’s 2UR-GSE 5.0 litre naturally-aspirated V8 from the LC 500, producing 472 hp at 7,100 rpm and 536 Nm of torque at 4,800 rpm. Paired with an eight-speed automatic gearbox, it enables the car to get from zero to 60 mph (96 km/h) in 4.5 seconds. Also standard are adaptive dampers, a Torsen limited-slip differential, and larger brakes.

As for the second-generation NX, it is now underpinned by the GA-K platform, allowing for a slight ballooning in size. It’s still a handsome car, with a big gaping radiator grille, continuous LED tail lights, and it’s the first model to bear the Lexus script on the tailgate.

The NX is also the automaker’s first model to get a plug-in hybrid system. Badged NX 450h+, it uses a 2.5 litre Atkinson-cycle four-cylinder engine that’s augmented with two electric motors. Lexus hasn’t provided the details to this, but it is the same system found in the Toyota RAV4 Prime, which produces a total system output of 302 hp. Lexus says this NX will do the 0-100 km/h sprint in six seconds flats, whereas an 18.1 kWh lithium-ion battery provides an all-electric range of up to 75 km (WLTP cycle).

Other powertrain options include a regular NX350h hybrid (non plug-in) that uses the same A25A-FXS 2.5 litre petrol engine, with the option of e-Four AWD courtesy of a rear motor (FWD variant also available). There’s also a new T24A-FTS 2.4 litre turbocharged engine in the NX 350, supposedly tuned to deliver 275 hp and 430 Nm of torque. A new “high-torque” Direct Shift eight-speed automatic transmission is expected to be fitted, sending power to all corners via a new full-time electronically controlled AWD system.