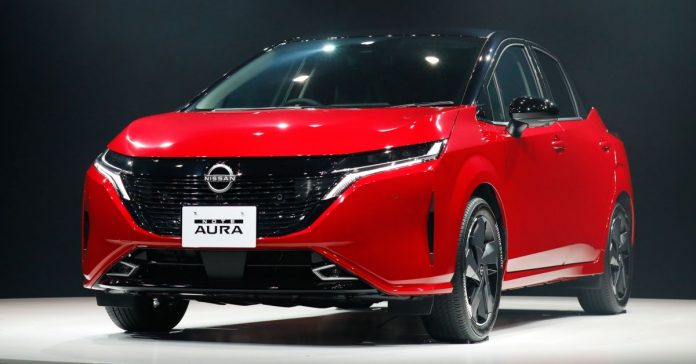 Nissan has launched the new Note Aura in Japan, which is a slightly redesigned version of the third-generation Note that made its debut last November. The model is set to go on sale in the country this autumn, and will be offered in front- and all-wheel drive configurations.

According to the Japanese carmaker, the Aura inherits the comfort, powertrain and advanced safety technologies of the Note e-Power that is already available in Japan, but with “added premium furnishings and system enhancements.”

The exterior revisions begin at the front, where the Aura gets slimmer headlamps that are clearly inspired by the Ariya all-electric SUV. The clusters retain their four-element LED setup and continue to be linked by a black bar at the top of the grille, but their new shape creates a more seamless look compared to the regular Note.

On the mention of the grille, there’s also a new diamond-shaped pattern for the insert, while LED light strips, which act as daytime running lights, are seen along the sides. The latter ends at the middle point of the grille, after which black trim pieces continue the line towards the bottom. Elsewhere, more pronounced side vents have been sculpted on the front bumper, while the lower intake has been reshaped and feature chrome garnish around the fog lamps. Along the sides, the Aura doesn’t differ much from a regular Note, but it does get some snazzy 17-inch aluminium wheels with resin inserts in a gunmetal finish.

While not immediately obvious, the Aura is actually 1,735 mm wide, which is 40 mm more than the standard Note. The new front bumper, along with a wider rear fender and bumper, contributes to the increase width to convey a wider stance and low centre of gravity, the company says. That’s not all, as the LED taillights are now linked by an illuminated light bar.

To go along with the tweaked exterior, the Aura comes in 14 body colour variations, including five two-tone combinations and nine monotone options. Some of the two-tone options are pictured here, including Garnet Red with Super Black, as well as Midnight Black with Sunrise Copper.

Moving inside, wood-grain trim adorns various parts of the cabin, including the lower instrument panel and centre console, while the door trims, front armrests and instrument panel get a tweed-like fabric overlay. The standard Zero Gravity seats in lower-end variants will get Herringbone-patterned, tweed-like fabric and synthetic leather upholstery, while costlier models are trimmed in genuine leather with a pleated design.

The “haute couture” interior is joined by a 12.3-inch digital instrument cluster and a nine-inch touchscreen infotainment system, which are items that the normal Note already gets. Available as an option is a Bose Personal Plus sound system that adds speakers into the front passenger headrests to provide a “premium acoustic experience.” Nissan also says that additional noise dampening in the roof, doors and front door glass help to improve NVH.

The Aura comes in either G or G Four form, with each available as a “leather edition” that gets the fancier upholstery mentioned earlier. The G receives the same front-wheel drive e-Power setup as the Note, which consists of an EM47 front electric motor rated at 136 PS (134 hp) or 100 kW) and 300 Nm of torque.

Meanwhile, the G Four gets an all-wheel drive setup that keeps the EM47, but adds on a MM48 electric motor at the rear that provides 68 PS and 100 Nm. In Nissan’s e-Power system, the car is driven strictly by electricity, although there is still an internal combustion engine to charge the lithium-ion battery that powers the electric motor(s). Both front- and all-wheel drive setups feature a HR12DE 1.2 litre three-cylinder petrol engine that makes 82 PS (80 hp) and 103 Nm.

For the sake of comparison, the range-topping, all-wheel drive X Four variant of the regular Note retails for 2,445,300 yen (RM91,417), so the Aura commands quite a premium for all its additional premium goodies.

IBM tells US employees to return to office in September