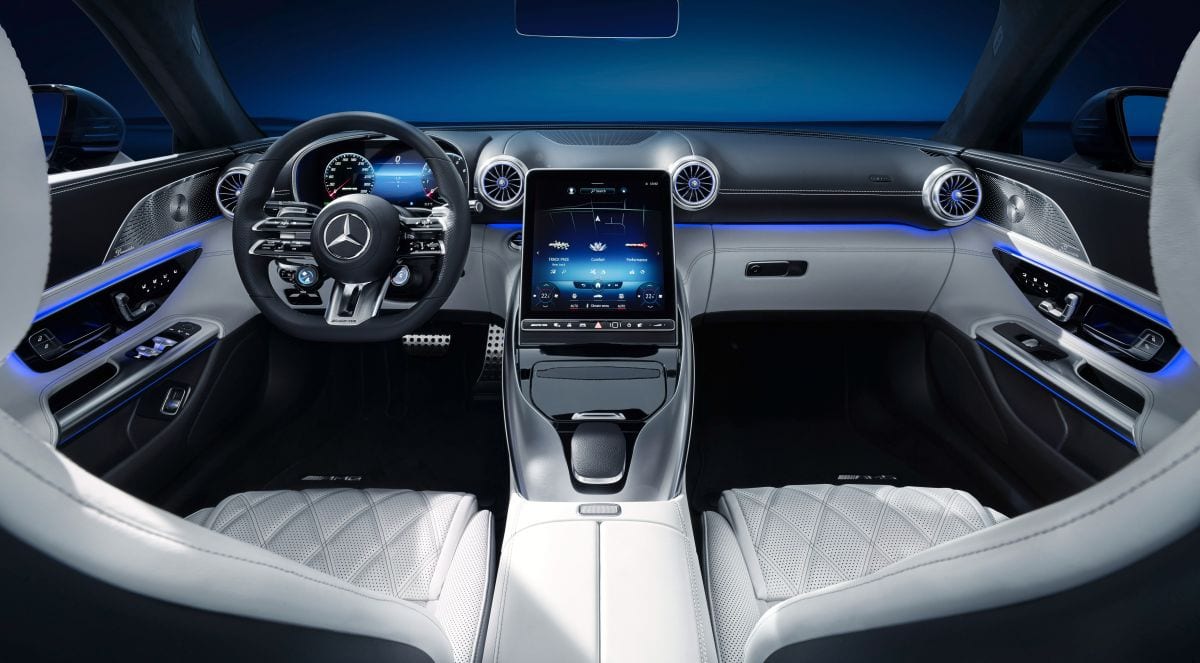 The teaser campaign for the new Mercedes-AMG SL continues, with the German carmaker now giving us a good look at the living space of the upcoming R232. According to the company, the interior is a mix of analogue geometry and digital world, which it is calling “hyperanalogue.”

On the mention of geometry, a long-standing peculiarity in the previous R231 SL was its asymmetrical dashboard, but the new model fixes that. The new, symmetrical design is said to be inspired by aviation, with a wing-like shape that is highlighted by four tubular air vents that form “power domes” at the top of the dash – these reference the jet turbines on planes.

The aviation-inspired design approach extends to the door panels, which are designed to blend into the dashboard to create a cockpit-like feeling. On both doors, you’ll find seat controls and door handles that are reminiscent of those in the latest EQS, accompanied by perforated metal covers for the Burmester loudspeakers.

The company also incorporated a few features that are driver-focused, starting with a 12.3-inch digital instrument cluster placed within a binnacle (the company prefers to call it a “high-tech visor”) rather than being a free-standing unit.

This is meant to provide better legibility, as the shaded screen is less susceptible to reflections caused by sunlight. Avoiding reflections when the roof is down is also the reason why the 11.9-inch, portrait-format touchscreen can be adjusted electrically into a more vertical position.

The touchscreen is linked to the second-generation Mercedes-Benz User Experience (MBUX) system that is also found in the new S-Class. As such, the graphics are crisp and there are plenty of functions at the occupant’s disposal, including Performance and Track Pace menus that emphasise the SL’s sporty character.

Meanwhile, the centre console looks similar to what you’ll find in the AMG GT as well as the GT 4-Door Coupé, as the design carries a NACA air duct signature that transitions into the touchscreen. Unlike those models, there are no dedicated buttons to adjust specific vehicle functions, so drivers will have to fiddle with the steering wheel dials, controls under the touchscreen or the touchscreen itself. As you’d expect, the cabin is trimmed in plenty of premium materials and customers will have no shortage of options to choose from. Sports or performance seats can be paired with single or two-tone Nappa leather upholstery, the latter available with diamond stitching or Dinamica microfibre with contrast topstitching in yellow or red. There’s also an ambient lighting system with 64 different colours and an optional head-up display.

The new SL brings back the 2+2 seating configuration that was previously found on the R129 from 1989, and the company says the rear seats are actually usable by human beings of up to 1.5 metres tall. If there’s no need for extra seating, owners can install a draught-stop to prevent air from blowing into the back of the neck of front passengers, or use it as additional storage – a golf bag is no issue here.

Another feature making a comeback is a fabric roof after generations of a metal hardtop, while the rest of the vehicle is brand-new, particularly its lightweight bodyshell. The R232 will also be the first time the SL gets a fully variable 4Matic+ all-wheel-drive system, with engine options likely being six- and eight-cylinder units.

Charges could be brought in U.S. over Haitian assassination -U.S. official