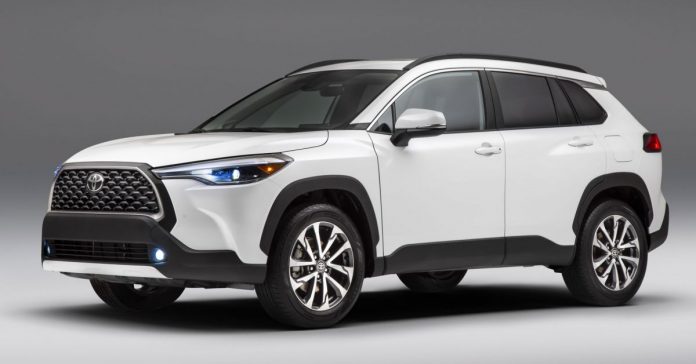 After some teasing, the Toyota Corolla Cross has now made its debut in the United States, where it will be built at the Mazda Toyota Manufacturing, USA (MTMUS) facility in Huntsville, Alabama. The TNGA-C-based crossover looks nearly identical to what is offered in Thailand and Malaysia, although the feature set is quite different from those markets.

In the US, the Corolla Cross will be powered by a Dynamic Force 2.0 litre naturally-aspirated four-cylinder petrol engine that outputs 171 PS (169 hp) at 6,600 rpm and 203 Nm of torque from 4,400 to 4,800 rpm. The mill is paired with a Direct Shift-CVT, which features a launch gear to increase the efficiency of the belt-driven system.

Buyers also have the option of front- or all-wheel drive, with the latter featuring Dynamic Torque Control, which can direct up to 50% of engine power to the rear wheels when needed, and disengages when it’s not to help improve fuel economy. Toyota estimates 13.6 km/l for FWD models and around 12.8 km/l for AWD models, both capable of towing up to 680 kg.

By comparison, the Corolla Cross we get here is powered by a 2ZR-FE 1.8 litre NA four-cylinder that makes 139 PS (137 hp) and 172 Nm, with drive going to the front wheels via a regular CVT. Toyota’s US division also hinted at “more coming next year,” suggesting that a hybrid version is on the way. Such a model already exists in Thailand, although we’ll have to wait and see if it will be similar.

Similar to here, the Corolla Cross uses MacPherson struts at the front and a torsion beam setup at the rear for FWD models. However, AWD models feature a fancier rear multi-link setup instead. On the base L trim, 17-inch steel wheels are fitted, while the mid-range LE gets alloys of the same size. Only the range-topping XLE sports a set of 18-inch wheels.

For safety, all trim levels come as standard with nine airbags, passive systems, a tyre pressure monitor, hill start assist, and the Toyota Safety Sense 2.0 suite. The last item consists of a pre-collision system and Lane Trace Assist, while blind spot monitoring (with braking assist) as well as front and rear parking assist are offered on higher trims.

The Corolla Cross comes in seven colours, including Wind Chill Pearl, Sonic Silver, Celestite Grey Metallic, Jet Black, Barcelona Red Metallic, Cypress and Blue Crush Metallic. The company has yet to reveal official pricing, but the crossover is expected to start around the USD20,000 (RM82,440) mark.

MULTIMEDIA: Join us in a virtual tour of Melaka