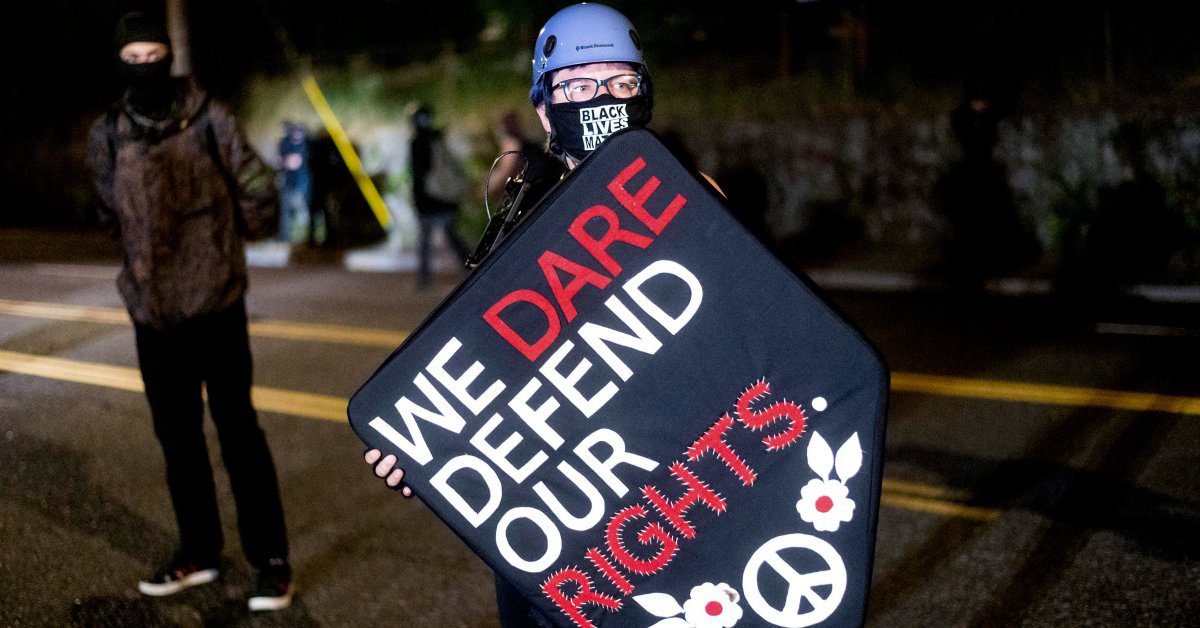 PORTLAND, Ore. — Law enforcement declared an unlawful assembly Friday night and arrested 27 people after protesters marched through the streets of Portland on to a police building, where officers stood waiting outside.

A few hundred demonstrators had met at Kenton Park before making their way to the Portland Police Association building, where officers warned protesters to stay off the streets and private property. Those who refused could be subject to citation, arrest, the use of tear gas, crowd-control agents or impact munitions, police said.

Around midnight, police ran down the street, pushing protesters out of the area, knocking people down and arresting those who they say were not following orders — as some people were being detained, they were pinned to the ground and blood could be seen marking the pavement. Law enforcement officers used smoke devices and shot impact munitions and stun grenades while trying to get the crowd to disperse, The Oregonian reported.

The Portland Police Bureau issued a statement Saturday morning, saying some officers reported that rocks, a full beverage can and water bottles had been thrown at them, prompting police to declare the gathering an unlawful assembly.

Police said at one woman who was detained was bleeding from an abrasion on her head, and she was treated by medics at the scene before being transported by an ambulance. The Portland Police Bureau said she jumped out of the ambulance and ran away before it left the scene, however.

Most of those arrested were arrested on suspicion of interfering with a peace officer or disorderly conduct, police said.

Demonstrations in Portland, which started in late May after the police killing of George Floyd in Minneapolis, are reaching 100 straight nights of protests that have been marked by vandalism and violence.

The slaying of a right-wing Trump supporter, Aaron “Jay” Danielson, shot and killed after he came downtown last weekend with a pro-Trump caravan of pickup trucks further roiled things in the liberal city. The prime suspect in the shooting, self-described anti-fascist Michael Forest Reinoehl, was killed Thursday night by law enforcement.

Since Floyd’s killing, nights of unrest that increasingly targeted a federal courthouse prompted President Donald Trump to dispatch U.S. agents to guard the building in July.

The presence of the agents from U.S .Customs and Border Protection, U.S. Immigration and Customs Enforcement and the U.S. Marshals Service was intended to tamp down on the demonstrations but instead reinvigorated the Black Lives Matter movement.

The U.S. agents began drawing down July 31 under an agreement between the U.S. Department of Homeland Security and Democratic Gov. Kate Brown. But as the unrest has continued and picked up, federal authorities have again said they may increase their presence in the city.

The pros and cons of printing your own photos