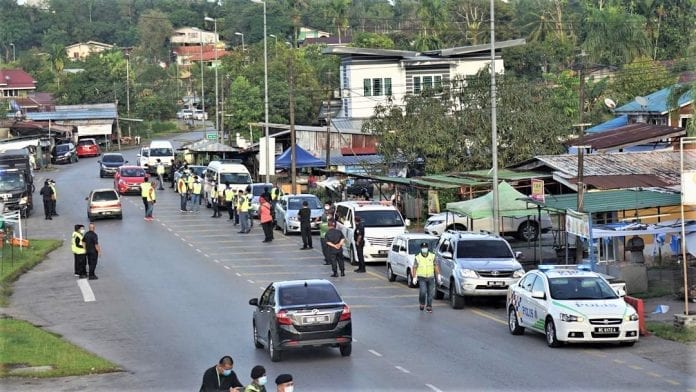 KUCHING: Police arrested 63 more individuals statewide for defying the movement control order (MCO) between 8am on Sunday and 8am yesterday.

“This was followed by Miri with 23; Padawan (4); and one each in Sibu, Sarikei, Saratok, Betong, Bau, Simunjan, Mukah, Lundu and Kapit.

“The latest figure brings the tally of arrests made throughout Sarawak to 1,767 since March 18,” he said in a statement.

To date, the number of individuals charged in court stands at 1,059.

All offenders were detained under Section 186 of the Penal Code and Regulation 7 (1) of the Prevention and Control of Infectious Diseases (Measures within the Infected Local Areas) Regulations 2020.

“We have also issued 18 traffic summonses, advised 20 residents to comply with the MCO and made four MCO-related announcements.

“Among the arrested suspects on Sunday was a 24-year-old woman who was found with a transparent straw tube containing a crystalline substance believed to be methamphetamine. This will be investigated under Section 12 (2) of Dangerous Drugs Act 1952,” he said.

All of the offenders were taken to Gita police station and investigated under Section 186 of the Penal Code and Regulation 11 (1) of the Prevention and Control of Infectious Diseases (Measures within the Infected Local Areas) Regulations 2020.

Merbin added that the operation from 3.30pm until 6.15pm was held at Jalan Astana, Petra Jaya and along Kampung Boyan until Kampung Bintawa.

It was to ensure that the MCO was complied with and that the residents did not carry out food sale activities during the Ramadan month as directed by the State Disaster Management Committee (SDMC).