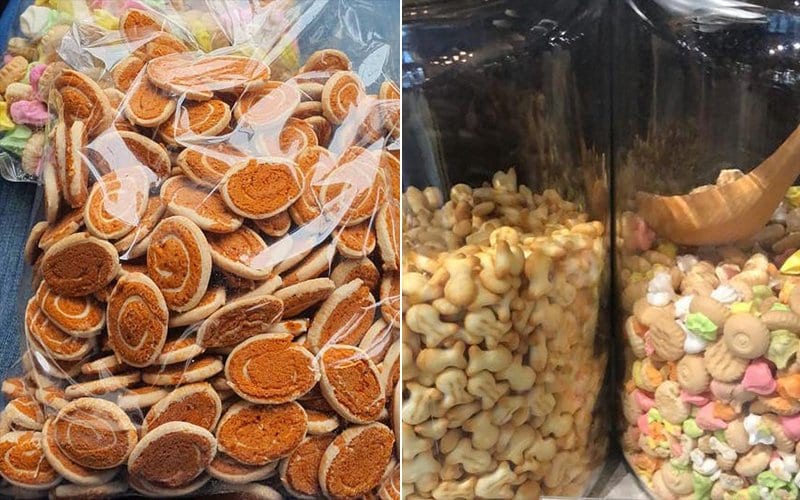 PETALING JAYA: Growing up in Malaysia, it was always a joy having a fistful of iced gems in your palm, delicately nibbling away at the crumbly biscuit while saving the best for last – the pastel-coloured swirl of icing at the top – sweet, crusty and melt-in-your-mouth delicious.

It was also a joy to blissfully suck on a stick of Choki Choki chocolate after a tiring day at school and later in the afternoon, dunking a crispy, crumbly slice of sugar-crusted Roti Kok into a steaming cup of coffee or tea – talk about the perfect pick-me-up!

Besides these sweet treats, mum and dad usually had a handy bottle of Asam Mo Far Kor stashed in the glove compartment of the car as a quick remedy for car sickness on a family trip up to Genting Highlands.

More than just snacks, these yummy delights helped create good memories of childhood, of moments when you were “rewarded” for finally getting that “A” for maths, or handed a fistful to cheer you up after skinning your knee during a particularly rough game of “police and thief”.

Unfortunately, these snacks are now extremely hard to find as air-conditioned, modern-day bakeries with their spread of pies, macaroons and cupcakes are now creating new memories for Malaysians.

For the older generation whose favourite haunts were the neighbourhood sundry shops selling old Malaysian favourites, here’s a walk down memory lane:

Apollo’s bright yellow packaging is recognisable from metres away and the fluffy cake it carried inside was a big hit with schoolkids.

You simply didn’t have a childhood if your mother didn’t send you packing to school without these sweet treats tucked away safely in your school bag.

There are many flavours – pandan, strawberry, blueberry, banana – but the all-time favourite was chocolate.

Remember squeezing these little packets as hard as possible to get every bit of chocolate paste out and into your mouth?

Granted, the chocolate wasn’t of the best quality, but the entire exercise of squeezing, sucking and savouring was just too darn good to give up.

Pop one of these heart-shaped babies in your mouth and experience the best fizzing sensation ever.

Once a massive hit at birthday parties, these treats are practically impossible to get your hands on these days.

This sour treat has been a hit amongst kids and parents alike. It was a popular cure for nausea, or for alleviating the bitter after-taste of medicine.

Students in particular resorted to munching on these when pulling an all-nighter right before an important examination.

Fun fact: Asam Mo Far Kor is made from the Calabash plant, found only in Africa, and Central and South America. The leaves of the plant are dried and processed to become the asam Malaysians know and love till this day.

Made from the fruit of the Chinese hawthorn, this dark pink candy are essentially discs, two millimetres thick and packaged in cylindrical stacks with label art resemblant of Chinese fireworks.

Haw Flakes were originally given to kids for deworming purposes. However, because of its sweet-sour flavour, it was seen more as a snack than anything else.

Incidentally, Haw Flakes has a fan base in other parts of the world, not just in Malaysia!

Before Kinder Eggs came rolling onto the snack scene, there was the original snack-with-toy-inside that Malaysians were all too familiar with, Tora.

Be honest, did you buy Tora for the chocolate or the toy? It was considered a monumental success worthy of bragging to friends at recess time if you could convince your mother to buy you one.

If you were a Malaysian who grew up in the 70s, 80s and 90s, you would know that these iced gem biscuits were crowned king of the snack world.

There was often the dilemma of which to eat first – the biscuit or the colourful sugary gem, or barbarically wolf the whole thing down in one go.

If eating with siblings or friends, be prepared to squabble about which colours you wanted most despite each tasting exactly alike.

These two-tone thin, crispy, and deliciously fragrant biscuits have a distinctive swirl and flavour that have made them a favourite tea-time snack.

Crisp, crumbly and sinfully delicious, these slices of bread are slathered with margarine, sprinkled with a generous dose of sugar and baked in an oven.

They are best enjoyed with a piping hot cup of tea or coffee. But be warned… one slice is never enough.

Fb whistleblower: ‘I wish to begin a youth motion’