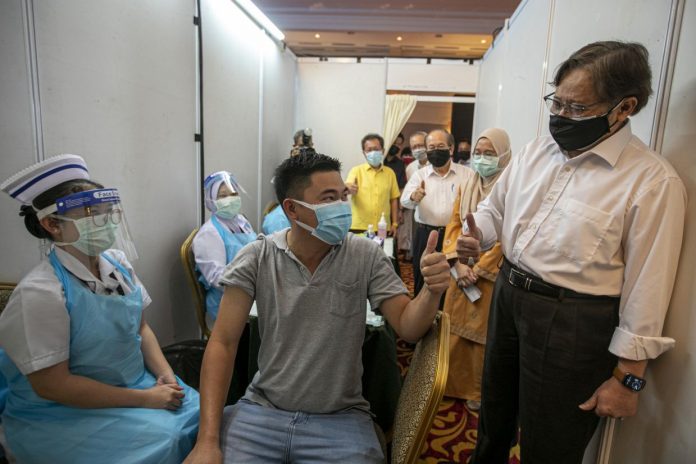 The Chief Minister said it was premature for the state to come up with its own thresholds to open up on a district-to-district level.

He said thresholds for states would be good so that those with lower figures could reopen.

“This is our view. What is happening in Malaysia is that the daily numbers are up to 6,000 (cases) a day and the most is in Selangor with over 2,000.

“That means we are being pulled down by the number in Selangor. So if the threshold is there (for states) and our numbers are low, then we can open up our economy,” he said after visiting the Jalan Masjid health clinic’s vaccination centre at Dewan Majma here on Thursday (July 1).

Earlier Thursday, Senior Minister Datuk Seri Ismail Sabri Yaakob said the government was looking at thresholds for states to transition into Phase 2 of the NRP, including the number of cases per 100,000 population.

He said it would be unfair to impose Phase 1 on states with fewer Covid-19 cases, such as Perlis with single-digit cases over the past week.

On vaccination, Abang Johari said 291,000 of the eligible 583,000 individuals in the Kuching division had received their first dose.

“Our target is that by the end of July or the first week of August, Kuching will be able to vaccinate at least 80% of the population with at least one dose,” he said.

On average, he added, the major urban areas of Sibu, Bintulu, Kuching and Miri had vaccinated 50% of eligible recipients with the first dose.

Deputy Chief Minister Datuk Amar Douglas Uggah said Sarawak’s maximum capacity for vaccination was 70,000 doses a day, depending on the availability of vaccines.

“We have mobilised our machinery from Lundu to Limbang and right into the interior.

“We also have the military combat medic team to support us,” he said.

Meanwhile, Abang Johari said the Sarawak government was not thinking about the coming state election at the moment, although the state’s target is to complete the vaccination programme by August.

“Our focus is on vaccination. We want our people to be safe.

“We are not focusing on the election, the rakyat’s safety is our priority,” he said.

The state legislative assembly’s term expired on June 6, but the Yang di-Pertuan Agong has advised the state government to continue functioning under the Emergency Ordinance.

The state election must be held within 60 days of the lifting of the Emergency.

Can video games have therapeutic properties?