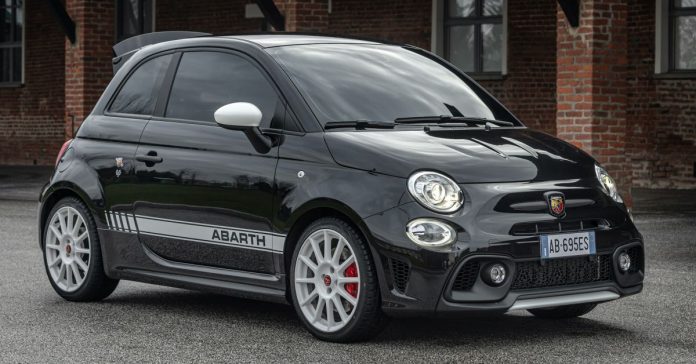 Abarth has released another special edition of its Fiat 500-based hot hatch called the 695 Esseesse, which will be limited to just 1,390 units. Despite the name, the collector’s model isn’t as track-focused or powerful as the previous 695 Biposto, and shares more in common with the Abarth 595 Esseesse.

However, there are some notable tweaks, including a new bonnet with twin power bulges that is made of aluminium, and is 25% lighter than a normal steel one. Together with an Akrapovic exhaust system, the 695 Esseesse weighs 10 kg less than a lesser 595 Competizione.

A standout feature is the “Spoiler ad Assetto Variabile,” which is a new rear wing with a manually adjustable angle from zero to 60 degrees, first seen on the previous 695 70° Anniversario. According to Abarth, at its more aggressive angle and with the vehicle travelling at a speed of 200 km/h, the prominent wing has an increased aerodynamic load of up to 42 kg.

The 695 Esseesse is available as a hatchback only (no convertible version) and comes in a choice of two colours – Scorpion Black and Campovolo Grey – with production equally split between them (695 units per colour). Every unit comes standard with white 17-inch alloy wheels with red centre caps, red brake calipers, dedicated emblems and white details (bumpers, mirror caps and side decals).

Inside, the dashboard is trimmed in Alcantara with the laser-cut wording “695 Esseesse” applied on the passenger side. The Sabelt seats also come with stitching that matches the exterior colour chosen, along with the wording “one of 695” on the headrests. The interior is finished with hints of carbon-fibre on the gear shifter, pedals, and steering wheel.

Under the bonnet, the familiar 1.4 litre turbocharged four-cylinder petrol T-Jet engine provides 180 PS (178 hp) and 250 Nm of torque. Drive goes to the front wheels via a five-speed manual, although customers can also order an optional six-speed semi-automatic transmission.

Performance-wise, the 695 Esseesse accelerates from 0-100 km/h in 6.7 seconds and has a top speed of 225 km/h. The car also gets Koni FSD (Frequency Selective Damping) dampers and four-piston red Brembo brake calipers in the front.

Smart sprayers targeting farm weeds to hit US market in 2022

Football: Soccer-Ronaldo’s future hangs over Juve as they look for first win