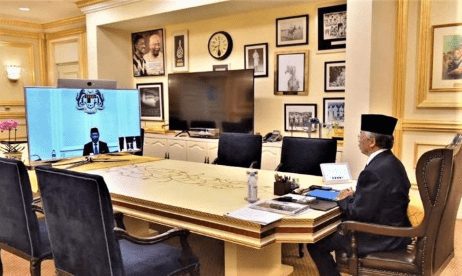 According to a posting on Istana Negara’s official Instagram page today, the pre-Cabinet meeting was held via a video conference following the extension of the movement control order to fight Covid-19 in the country.

“The pre-Cabinet meeting is among His Majesty’s weekly activities or routines, during which he would discuss and exchange views with the Prime Minister particularly on current issues,” the posting said.

It also said that, normally, Al-Sultan Abdullah would go to Istana Melawati for the pre-Cabinet meetings.

“His Majesty has also consented that the weekly pre-Cabinet meeting continues to be held via video conference throughout the MCO and this reflects the King’s great concern for the country’s administration and people’s wellbeing,” it added.