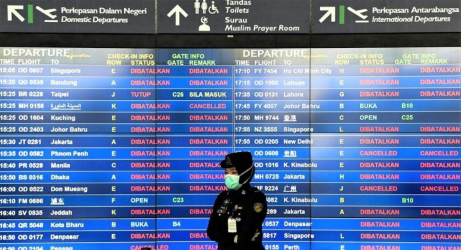 He stressed that all aviation operations were subject to government approval despite recent advertisements on the sale of flight tickets.

“With regard to airlines advertising for this coming period, I hope they will only operate after the government’s approval.

“Although they sell the tickets, their operations are determined by the government. Even if the MCO ends, there’s a SOP we have to follow. Let’s say the MCO ends, it doesn’t mean they can operate freely as normal. The government has introduced specific SOP.

“If there are companies which have sold tickets for that date (a day after the MCO), and if the government doesn’t approve, then they do not have the approval,” he told a press conference after chairing the Special Ministerial Committee meeting on MCO here today.

He said this when asked about airline companies which had sold flight tickets offering various special deals beginning April 29.

Meanwhile, Ismail Sabri said that domestic flights for Peninsular Malaysia from the Kuala Lumpur International Airport (KLIA) were not operational while those to Sabah and Sarawak were scheduled for just once a week, as announced by the Transport Ministry.

“Domestic flights for Peninsular Malaysia are still allowed from the Sultan Abdul Aziz Shah Airport in Subang via Firefly. Yesterday, a total of 479 passengers travelled via the airport.

“For locals going back to Sabah and Sarawak, they will be quarantined the moment they arrive there as announced earlier,” he said.

He said the government’s policy regarding interstate travel remained the same, whereby any movement between states is banned except for those with a letter of permission from the police.

He explained that among the reasons interstate travel would be allowed was for emergencies only, such as the death of family members or health issues, and that permission letters could be obtained from the nearest police station.

“Those who have to undertake such trips, whether by land or air transport, must produce the permission letter from the police,” he said. – Bernama