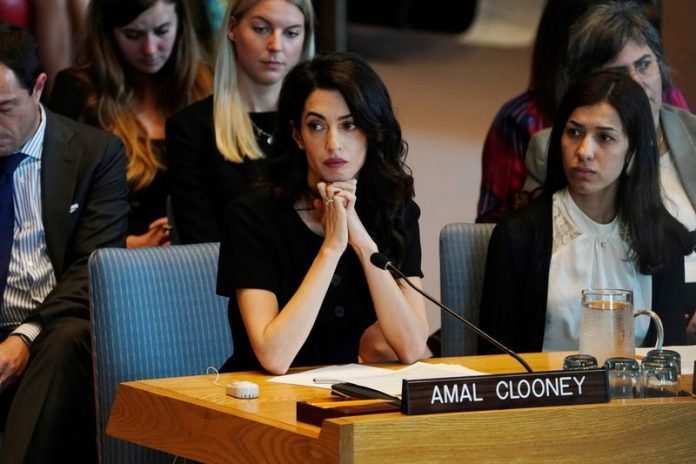 AMSTERDAM (Reuters) – Human rights lawyer Amal Clooney on Tuesday argued that prosecutors should consider additional charges of sexual violence for a man accused of atrocities including rape, torture and murder during the 2003-2004 conflict in Darfur.

The International Criminal Court (ICC) is holding hearings on whether to confirm 31 charges against Ali Muhammad Ali Abd-Al-Rahman, who prosecutors say was responsible for atrocities as senior leader of thousands of pro-government “Janjaweed” fighters in Sudan.

On Monday, Prosecutor Fatou Bensouda said evidence showed Abd-Al-Rahman was a commander known as Ali Kushayb who led attacks on villages and was implicated in more than 300 murders and raids that forced 40,000 civilians from their homes.

Defence lawyers argue Abd-Al-Rahman, who surrendered in June 2020, is not Ali Kushayb.

“I hope that this hearing will mark a turning point in the history of Darfur, and that a trial in this case is only the beginning of a reckoning that the victims deserve,” said Clooney, appearing as a representative for victims, speaking by video link.

Abd-Al-Rahman, the first suspect to appear at the court in a case linked to Darfur, has not yet entered a plea. Defence lawyer Cyril Laucci said he intends to contest the ICC’s jurisdiction, which was granted by a United Nations referral.

Clooney said the charges against Abd-Al-Rahman should be confirmed, and questioned whether they should not also have included additional charges for violence against women, and for genocide.

ICC confirmation of charges hearings are held to consider whether there is enough evidence against a suspect to proceed to trial. Judges have not set a date for that decision.

Darfur’s conflict began in 2003 when mostly non-Arab groups rebelled against the government in Khartoum, which mobilised mostly Arab militias to crush the revolt.

Sudan’s former president Omar Hassan al-Bashir was deposed in 2019 and is in prison in Khartoum.

The election where the president wants the opposition to win