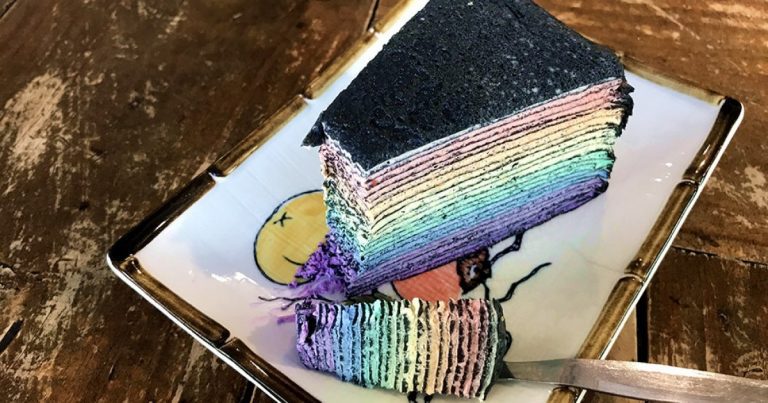 MELAKA, Sept 6 — Every café needs a signature dish to stand out. The multi-hued layers of a rainbow mille crêpe might just be Second Floor’s if its popularity with diners is anything to judge by.

Some might consider the cake’s rich colours somewhat garish but that might just be the point. Malaccans know that their beloved city is nothing if not possessing of a storied past and that history is something worth celebrating. All the more during the interesting times we live in.

Just ask Ferlyn Jee, the current owner of Second Floor and proud Malaccan. She shares, “Most of the cafés in Melaka are run by non-Malaccans; I’m Malacca-born, married without kids so I’m able to devote myself fully to this.”

Signs of Jee’s dedication are found everywhere. The shop’s eclectic décor mixes and matches vintage typewriters and telephones with Peranakan bakul siah, the reds and blacks of the latter a firm nod to the olden days. Illustrations of baristas brewing coffee share space with children’s picture books.

This isn’t confusing; this is the Malaccan way.

The 33-year-old is far from the first owner of the shop, however. She recalls, “The original shop was called ‘Coffee in the House’ and started back in the 1990s in Melaka Raya. It had seen many owners over 20 odd years before I took over in 2016.”

By then the café had moved from the cramped streets of Melaka Raya to the first floor of a row of shophouses in Kota Laksamana. The full name of the shop — Second Floor Coffee House — is bound to draw raised eyebrows among first-time visitors. After all, the café is now neither on the first nor the second floor but on the ground floor!

Jee explains, “Why was it named Second Floor instead of First Floor? Well, that’s simply because most customers rarely call it the first floor but Èr Lóu (‘second floor’ in Mandarin). Then two years ago, we decided to move to the ground floor as it’s more spacious for gatherings and to make it easier for senior citizens, so they needn’t climb up the stairs.”

Once visitors get over the shop’s less than accurate name, they flock to the plethora of mille crêpes. Besides Second Floor’s signature rainbow (which also comes in a picture-friendly charcoal rainbow variation), there are many other flavours including the very local gula Melaka, earthy yam and an ethereal Earl Grey.

Those hankering for more savoury fare might delight in the menu’s otak-otak pasta and salted egg yolk squid fried rice. There’s even the good old-fashioned butter sugar toast of our collective Malaccan childhoods.

Or have a simple late lunch, as I did. A bowl of rice topped with fried cubes of luncheon meat and nicely scrambled eggs reminds me of something my mother would dish up in a jiffy for me when I came home from school.

I’m not sure she’d know what to make of the keto friendly butter coffee though. (For the record, it’s delicious — how could you go wrong with butter and coffee?) This new addition to the café’s menu is emblematic of Jee’s pursuit of new ways to drum up business.

The self-confessed outsider to the food-and-beverage (F&B) industry says, “When I took over in 2016, I noticed locals had lost interest in Second Floor, perhaps because of newer cafés popping up. That’s when I decided to apply ‘coffee art’ drawing instead of traditional latte art pouring for our coffees.”

As a graduate from Dasein Academy of Art, Jee had a foundation in art. That helped but it was still challenging. She says, “To draw beautifully on milk foam is never an easy task especially when you have no one to refer to or learn from. It requires basic milk steaming skills of controlling nice foam, etching practise on accuracy and time control.”

Jee’s efforts paid off as her “coffee art” endeavours began attracting new customers, both the younger crowds wanting to share the colourful milk foam drawings on social media as well as families enjoying the experience of something fresh.

Still, location matters greatly, more so in Melaka where tourism is significant. Unusually for a café, Second Floor opts to buck this trend. Its current address in Kota Laksamana, Jee notes, is more of a “commercial area with local neighbourhood surroundings, so we have a loyal base of local repeating customers.”

Therein lies the rub: for other shops that reside in the Jonker Street hub, even a brief reduction in tourist footfall could leave a dramatic impact on their business.

Second Floor has shielded itself from the worst of any downturn by relying mainly on Malaccans for clientele. At the same time, Kota Laksamana is close enough to the Jonker area that when the tourists return, some are bound to drop by in their café hopping adventures.

This is not to say that the shop is entirely unaffected by the movement control order (MCO). Jee explains, “The MCO has impacted daily coffee drinking habits. The uncertainty generally spurs consumers to cut off unnecessary expenses. They stop ordering coffee when ‘coffee art’ is not available for the takeaway.”

Even with food delivery, the shop is barely hitting a quarter of its usual sales targets, according to Jee. She adds, “Social media helped us stay connected to customers, to maintain their interest in and demand for coffee after MCO. I like to think that they will see our café in a different way and regain appreciation for the baristas’ skills.”

Another way Second Floor has adapted during MCO is with an experimental “send your love” project. Jee says, “It’s something we’ve never tried before. Every order of our handmade chocolate truffles comes with our hand-drawn memos. We even do figure sketching.”

The trial demonstrated that consumers are willing to spend more on — to use Jee’s parlance — “caring gifts” to stay connected with each other. She shares, “That gave us the light of hope to get through rough times. When we collaborated with a local flower shop, Glynis Florist, during MCO to continue this project, it provided our café with some extra side income.”

Clearly, the F&B businesses that are willing to try new things, even without any guarantee of success, have a better chance of surviving. Tough times come and go; Malaccans will tell you they’ve seen it all.

And perhaps they have. They’ve certainly learned to embrace the good times, however rare these might come by nowadays; they understand what is precious.

Jee sums it up sumptuously, as Malaccans are wont to do: “I enjoy every moment of happiness in the café. The surprised faces seeing beautiful art on coffee, the laughter of friends hanging out together, the joyous tears from reunions of family or old classmates.”