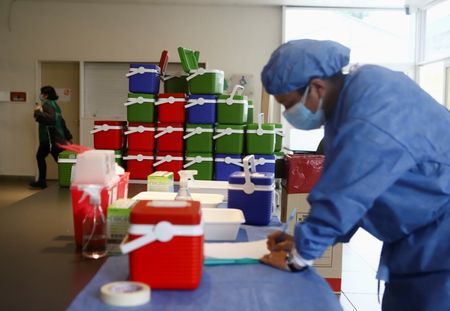 BUENOS AIRES (Reuters) – A coalition of nine Argentine port worker unions will go on a nationwide 24-hour strike starting at midnight to press for vaccinations against the coronavirus, the labor groups said in a statement on Thursday.

Workers including tugboat captains and customs officers have held similar work stoppages recently, as the South American grains powerhouse gets hit by a second wave of COVID-19 cases.

“We have raised the issue and held meetings with different authorities with the purpose to obtaining concrete answers regarding the application of vaccines against COVID-19 to our workers,” the unions said in the statement. “But to date, we have not obtained concrete answers or solutions.”

So far 87,261 people have died of the virus in Argentina, but the country’s vaccination program has had a slow rollout.

Argentina is the world’s No. 3 corn exporter and top supplier of soymeal livestock feed used to fatten hogs and poultry from Europe to Southeast Asia.

“We will not be able to moor and unmoor cargo ships, so that will impact loading,” Guillermo Wade, manager of Argentina’s Chamber of Port and Maritime Activities (CAPyM), told Reuters.

A joint statement from five port industry chambers requested that the government “intervene” to prevent the strike and allow shipping to “continue operating normally while the request from the unions is resolved favorably.”

The strikes are occurring during high export season, as corn and soy, the country’s two main cash crops, get harvested.

Agriculture is Argentina’s main source of export dollars needed to replenish central bank reserves strained by efforts to pull the country out of a three-year recession while grappling with the pandemic.

The Papers: 'Crackdown on unions' and PM plans for third term