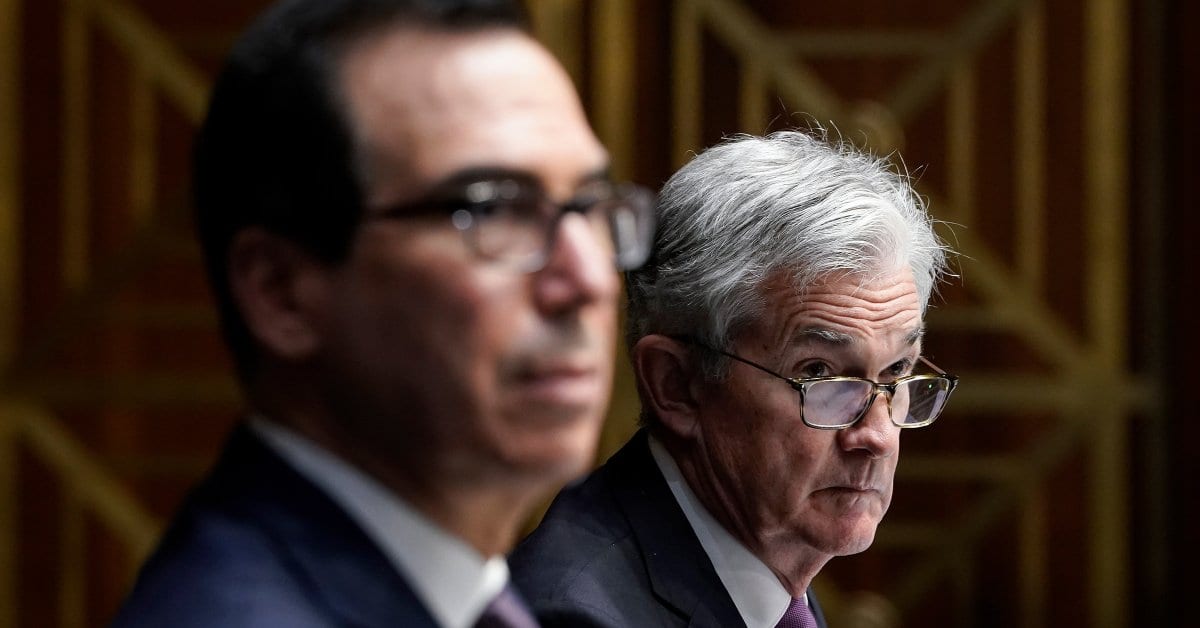 In a seemingly routine announcement, out-going Treasury Secretary Steven Mnuchin abruptly asked the Federal Reserve to return money that it had been advanced earlier this year to make emergency purchases of corporate bonds, municipal bonds, loans to mid-sized businesses, and almost any institution public or private that found itself in duress because of the economic consequences of the COVID-19 pandemic.

Many of these programs amounted to hundreds of billions of dollars, and though they were largely untapped during the worst of the spring, they remained in place as possible ballast for further economic downturns. Their scale was rather extraordinary, allowing the Fed to use its lending tools more than at any time in the past to extend trillions of dollars to everything from the company employing 500 people in a small midwestern city to buying a municipal bonds issued by a large metropolis to state bonds issued by any government. The very promise of that in the spring was enough to stabilize the market for these bonds without the Fed actually having to spend much. But with COVID-19 surging across the country, and state after state enacting new restrictions as individuals adjusting to a more widespread contagion, these programs could be needed in the coming months, just as Mnuchin is attempting to end them.

That is a profound mistake. It is the precise opposite of what should be done. And it is even more of a mistake given the current inability of Congress to pass a new round of fiscal stimulus commensurate with what we saw in the spring when the first CARES Act was passed, injecting several trillion dollars of needed aid to individuals and companies. In fact, not only should these programs not be ended; they should be extended, and then enhanced, because unless Congress does its job (an intriguing concept no doubt) as the nation’s fiscal authority and opens the spigots and spend now, the United States is not just facing a long COVID winter but an economic one as well, which will extend not until there is a wide-spread vaccination programs but far longer than that.

Since the Great Depression, times of severe economic duress have demanded aggressive action by the federal government to spend money in order to float the economy until it can become more self-sustaining. Until very recently, that was the responsibility of Congress to allocate and the executive branch to implement. In 2008-2009, the exigencies of the financial crisis demanded aggressive action from the Federal Reserve as well, which began to expand how much it lent to banks well beyond what it had before. It’s policy of “quantitative easing” wasn’t invented in 2008 but the scale thereafter was novel.

The Fed’s guarantees in the spring to buy just about any financial asset went well beyond those efforts in 2008-2009, along with a promise to inject several trillion dollars into the system should that be necessary. While much of that money went unspent, the promise alone was enough to bolster the financial system and prevent a healthcare and economic crisis from becoming a systemic meltdown.

It is those emergency programs that the Treasury Department is now attempting to end, on the false assumptions that the worst of the economic crisis has passed and perhaps on the venal assumptions that yanking those credit lines just as unemployment and business failures accelerate will burden an incoming Biden administration. Mnuchin attempted damage control when his decision was widely assailed by saying that these programs can be restored at any time, which does not answer the question of why terminate them in the place. While the Treasury and the Trump administration cannot completely curtail the Fed (which is, after all, still an independent agency), it can limit the extent of what the Fed can do at precisely a time when the need for what it can do is becoming more acute.

The politics aside, demanding that the Fed become the primary bulwark against severe economic contraction is not without controversy as a matter of principle and policy. The Fed is supposed to monitor, regulate and maintain the stability of the monetary system. It is not supposed to be a replacement for fiscal stimulus. Or to put that in plain English, it is supposed to make sure that the financial system has neither too much money nor too little, but it is not supposed to supplant Congress as the institution in charge of how much government spends.

That is true in normal times and even abnormal times, but should that be true in desperate times?

The argument is favor is simple: It’s appearing increasingly likely that there will be no additional stimulus passed by Congress in 2020. While it’s theoretically possible that some amount will be agreed on when the Democratic House and the Republican Senate authorize the continuing funding of the U.S. government in December, the White House has receded from the negotiations and neither party seems at all urgent to get something done before a new Congress and president are sworn in toward the end of January.

But the world does not halt until then, as the United States faces a renewed COVID-19 surge, economic activity is once again slowing, and will almost deteriorate further into 2021. Airlines bookings, which had been rising, are now sagging again in the face of new state restrictions on activity and widespread concerns about holidays as a source of transmission. Cities are warning of sharp cuts to essential services as early as January, and small businesses are once again struggling in the absence of any more federally-backed emergency loans that floated them in the spring and into summer.

Cities and municipalities that may be among the hardest hit. One of the major snags in the earlier negotiations about a new stimulus bill revolved around aid to state and local governments. The Republicans and the president were strongly opposed to “bailing out” local governments they claim were poorly managed before the pandemic. In New York, the transit authorities are warning of massive cuts to services that will almost certainly impede the recovery of a metropolitan area that accounts for nearly 9% of the entire GDP of the United States. That alone could be solved by the Fed loaning billions at favorable interest rates.

And that is precisely what it should not do, on principle, according to many. Former Dallas Fed governor Richard Fisher, widely admired on all sides of the political spectrum and currently working with Texas on its economic recovery, is wary of the Fed being used and seen as the last resort. He understands that with Congress not doing its job and expediency demanding something be done to avert collapse, it is tempting to turn to the Fed as a Hail Mary pass. Even so, he warns that, “Central banks shouldn’t supplant fiscal authorities, and by giving in, you let them off the hook. Once we open that door of expediency, you can’t shut it.”

The case against the Fed doing more is that we create structures and rules because of the long-term demands of a functional, balanced and checked system. It is always tempting in a moment of duress to break those rules and violate those principles, but Fisher believes that the more the Fed deviates from its lane, the worse it will be for our economy over the long-term. It becomes a systemic form of moral hazard: If Congress knows that it can abjure its responsibility to be the fiscal authority because the Fed will compensate, then it will never be forced to reckon with its own dysfunction.

That is a fair argument, and 99% of the time, it is likely the right one. But in very rare moments, there are genuine emergencies, and the ravages of this pandemic cannot be underplayed. Now is that time. The Fed has the tools, and we don’t have much time to avert an additional level of economic harm that could last for years. Call it expediency; call it necessity; even call it wrong on principle. But do it all the same.