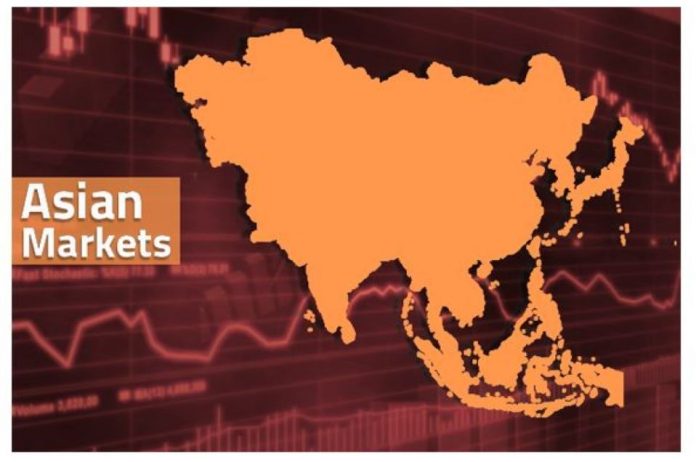 SYDNEY: Asian shares stumbled to a one-week low on Monday and perceived safe haven yen edged higher amid a relentless surge in coronavirus cases and fears of rising inflation while oil prices fell on oversupply worries.

In a sign the gloomy mood would extend elsewhere, Eurostoxx 50 futures fell 0.7%, while those for Germany’s DAX declined 0.6%. London’s FTSE futures were 0.8% lower.

That left MSCI’s broadest index of Asia-Pacific shares outside Japan at 677.45 points, a level not seen since July 12. The index, down 1.3% on Monday, was on track for its biggest daily percentage drop since July 8.

Oil prices sank after an agreement over the weekend within the OPEC+ group of producers to boost output at a time when the outlook for demand is still cloudy.

Global economic growth is beginning to show signs of fatigue while many countries, particularly in Asia, are struggling to curb the highly contagious Delta variant of the coronavirus and have been forced into some form of lockdown. The spectre of elevated inflation, which the market has long feared, is also haunting investors.

Economists at Bank of America downgraded their forecast for U.S. economic growth to 6.5% this year, from 7% previously, but maintained their 5.5% forecast for next year.

“As for inflation, the bad news is it’s likely to remain elevated near term,” they said in a note, pointing to their latest read from their proprietary inflation meter which remains high.

“The good news is… we are likely near the peak, at least for the next few months, as base effects are less favourable and shortage pressures rotate away from goods towards services.”

U.S. Federal Reserve Chair Jerome Powell has repeatedly said any inflation flare-up is expected to be transitory, indicating monetary policy will remain supportive for some while yet.

Yet, markets remain hard to convince.

“As such, we prefer to be somewhat underweight duration, mainly through U.S. treasuries,” said Michael Grady, head of investment strategy and chief economist at Aviva Investors. “Overall, we have a neutral view on currencies.”

Action in the currency market was muted on Monday.

The dollar was mildly firmer against a basket of major currencies at 92.734.

The risk-sensitive Aussie slipped to $0.7372, the lowest since last December during early Asian trading.

These losses came despite stronger-than-forecast U.S. retail sales last week, which rose 0.6% in June, contrary to an expected decline.

Next on investors’ radar is June quarter corporate earnings with Netflix, Philip Morris, Coca Cola and Intel Corp among companies expected to report this week.

Bank of America analysts forecast an 11% earnings beat, which they say would help refuel investor confidence in broader economic recovery and drive a rotation back into so called “value” stocks, which currently trade below what they are actually worth.

Bloomberg News temporarily suspending work of its journalists inside Russia