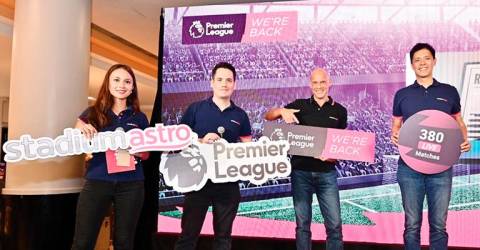 PETALING JAYA: English Premier League (EPL) fans are in for a massive treat as paid-television broadcaster Astro are offering an unparalleled viewing experience in 4K Ultra High Definition (UHD) for live matches in the upcoming season scheduled to kickoff on Saturday.

The 4K UHD offers a much sharper live viewing quality compared to High Definition, an upgrade that will delight millions of Premier League fans across the country looking forward to catching the likes of Liverpool, Manchester United and Manchester City in action.

Astro group chief operating officer and chief executive officer, TV, Euan Smith said the upgrade could not have come at a better time.

“We have lost the (Tokyo) Olympics and Euro 2020 over the course of this year, and we wanted to shout about the English Premier League in a big way. Of the 380 EPL matches in the new season, a large number of them will be shown in 4K. It is indeed a change in viewing experience.

“We will also show matches in 4K for the La Liga and Formula One,” Smith said.

“The only way to guarantee quality delivery is through satellite, and that is what we aim to deliver. Besides this, we will also be knitting together high quality Malay, Chinese, Tamil and Hollywood films,” he added at the launch of the new season at the weekend.

Piracy is also a major issue that paid television broadcasters have to battle regularly, and Astro is teaming up with the EPL to tackle it.

“We are working with the government and the EPL to tackle this issue through an anti-piracy campaign called ‘Boot Out Piracy’. The EPL has setup an office in Singapore and we are working closely with them. This is a problem for all paid television broadcasters,” CK Lee, Astro Head of Sports said.

Former Manchester United fullback Gary Neville was also present virtually from England at the launch and shared his thoughts on the new season.

“Man City will be raring to go and knowing Pep Guardiola, he will be extremely eager to snatch the league title from Jurgen Klopp’s Liverpool.

“Klopp’s side were magnificent last term and were deserving champions but I am going for Man City to win the League in this campaign,” said the former England international.