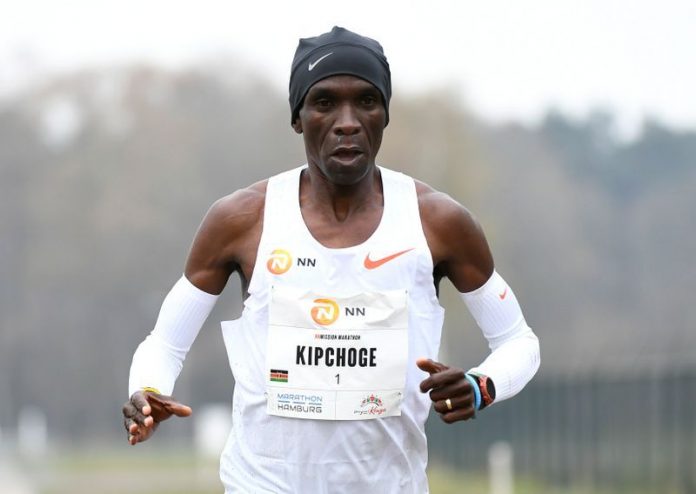 NAIROBI (Reuters) – Eliud Kipchoge, the defending Olympic marathon champion and world record holder, said on Friday that he still has the hunger for competing and that winning gold in Tokyo could be his greatest achievement.

Kipchoge, who is the first person to run the distance under two hours in an unofficial race, is one the top draws for the Olympic Games which are scheduled to start on July 23.

He reminded his rivals what they will be up against in Sapporo in August after cruising to victory in the Netherlands in April, finishing with a time of two hours, four minutes and 30 seconds to reaffirm his status as the man to beat after a shock defeat at October’s London marathon.

“I am still hungry for running in the Olympic Games and winning a gold medal, so I still feel fresh every time I wake up,” the 36-year-old told reporters in a briefing on Friday.

“Actually if I win a gold medal this will be the highest,” in terms of achievement, Kipchoge said, having won gold in Rio in 2016.

This year’s Games will be different, Kipchoge acknowledged, as they have been delayed a year due to the COVID-19 pandemic and will go ahead without spectators.

However, he said he was still excited about running in Sapporo and saw the Games as a way to give hope to people who have had to endure a tough year.

“My participation, personally, our participation as a Kenyan team, and the participation of all the countries who are going to participate in the Tokyo Olympic Games is a sign of hope to the whole world,” he said.

“It’s a sign in that we are actually preparing for the best moments ever whereby we’re going to have our normal lives again. So there is a light at (the end) of the tunnel. That’s why we are going to Sapporo.”

Kipchoge added he was ready for the heat in Sapporo and that it was not a huge deal as everyone will have to contend with the same conditions.

“All of us will be on the same frying pan,” he said. “The best one will win.”

He was disappointed by the decision not to have fans at the Games with authorities on Tuesday asking spectators to stay away from the marathon and race walk at the Olympics.

“I would be more happy if actually all these challenges could not be there and fans could actually be lining up on the road to cheer us, give us hope, we give them hope about the world, running is about hope. But all in all, we respect the authorities,” he said.

Asked whether the race in Sapporo would be his last, Kipchoge said he was only focusing on winning gold for now.

“The end of my career will come automatically that’s for sure, that’s in front of my mind, but for now I still want to compete more,” he said. “I still want to go around the world and run, inspire people.”

The Kenyan said he draws inspiration from athletes in other sports such as football’s Cristiano Ronaldo and Lionel Messi, tennis great Roger Federer and basketball legend LeBron James, but that it was Japanese tennis youngster Naomi Osaka who was also earning his admiration.

“Naomi Osaka, a new kid on the block as far as tennis is concerned, is a good motivation, to actually see young people coming up and take the sport to the next level,” he said.