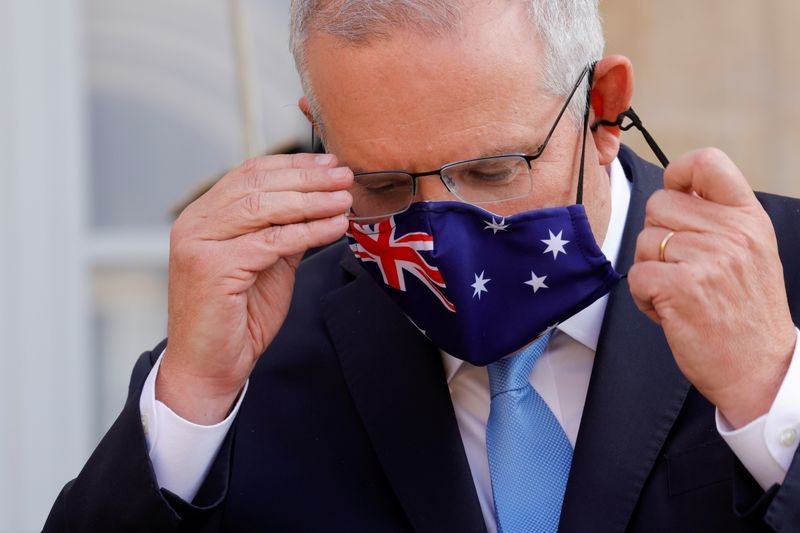 CANBERRA (Reuters) – Australian Prime Minister Scott Morrison on Monday departed for Washington to meet with leaders of the Quad grouping amid criticism over his government’s decision to abandon a $40 billion submarine deal with France.

Australia last week said it would scrap a deal with France’s Naval Group to build a fleet of conventional submarines and would instead build at least eight nuclear-powered submarines with U.S. and British technology after striking a trilateral security partnership.

France has said the relationship with Australia and the United States is in “crisis” and has recalled its ambassadors from both countries.

“The French are very unimpressed and the sight of Morrison, Biden and Johnson together will do little to repair ties,” said Haydon Manning, a political science professor at Flinders University in South Australia.

“This is all about ensuring that Australia’s sovereign interests will be put first to ensure that Australians here can live peacefully with the many others in our region,” Morrison told reporters in Sydney as he boarded the plane to Washington.

New agreements furthering cooperation between the four countries are expected, but Australia will not announce strengthened climate targets sought by the United States, one senior government source said.

Morrison has rejected setting a target of net zero emissions by 2050 and is under pressure to do more ahead of a United Nations climate summit in Glasgow from Oct. 31 to Nov. 12.

Morrison is also facing growing pressure at home following the resignation of Christian Porter as minister for innovation and science after he accepted an anonymous donation to partially fund his fees when he launched defamation action against Australia’s public broadcaster.

Morrison had sought advice on whether the donation – which stoked concerns about donor could seek outsized sway over the minister – could breach ministerial rules, but Porter on Sunday resigned.

Morrison must return to the polls by May 2022 and a widely watched poll on Monday showed the opposition centre-left Labor party on course to win power for the first time since 2013.