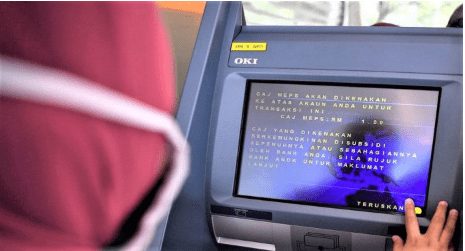 PUTRAJAYA: Bank Auto-Teller-Machines (ATMs) will henceforth be only open from 8 am to 8 pm to further control movement of people during the movement control order (MCO) period.

Senior Minister (Security Cluster) Datuk Seri Ismail Sabri Yaakob said, according to police feedback, many were giving the excuse that they wanted to withdraw money from 24-hour ATMs in order to go out of their homes, especially late at night.

“Many are going out past the cut off time (8 pm) with some even as late as midnight citing emergencies and they want to withdraw money in the late hours. So, ATM operating hours will be limited to from 8 am to 8 pm.

“After this no more excuses for going out till midnight to make ATM withdrawals,” he said at his daily briefing on the MCO after today’s meeting of the Special Committee of Ministers on the MCO at Perdana Putra here.

On food delivery operations during Ramadan, expected to start on April 24, Ismail Sabri, who is also Defence Minister, said the National Security Council (NSC) will be issuing the Standard Operating Procedures (SOP) on the matter.

The SOP is expected to be out in two or three days’ time.

“The government knows that even before the “sahur” (pre-dawn) meal there will be orders for food. So, today’s meeting has already asked NSC to issue the SOP on this,” Ismail said.

The MCO which has entered its third phase is expected to end on April 28 if the “battle” to contain the Covid-19 pandemic in the country is successful by then. – Bernama