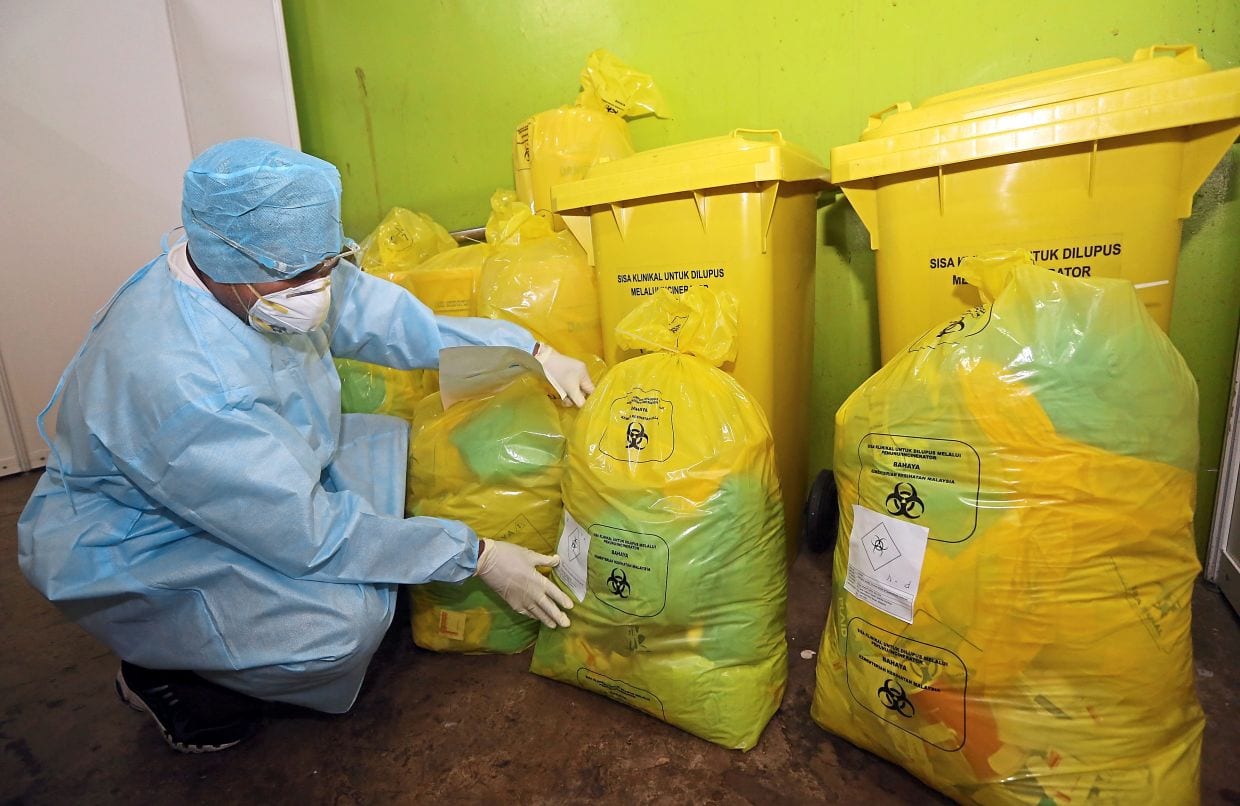 PETALING JAYA: Millions of people have walked through the doors of vaccination centres to get their jabs but the nitty-gritty aspects, that are often painstakingly observed to ensure the mechanism at such places is running at optimum, are often overlooked.

“The pharmacist starts at 7am and picks up the vaccines every Monday and Thursday, or on Tuesday and Friday. They pick up the orders from a Health Ministry pharmacist.

“When the pharmacist brings the vaccines back, the cold chain process is monitored as it requires a temperature of between 2°C and 8°C.

“Cold chain monitoring is also conducted at every vaccination booth periodically,” he said during a visit to the PPV.

The centre is manned by 200 to 300 personnel and is open 12 hours a day throughout the week so that all can get their vaccinations promptly and safely.

Before the PPV opens its doors daily, Dr Ang said a briefing is conducted in the morning by each station master to re-emphasise the daily operation needs.

“We rarely do mass briefings unless there is a common issue that needs to be addressed such as the use of face masks, need to observe social distancing protocols or if there are new guidelines or operating protocols as well as safety or security issues that we need to adhere to,” he said.

In the afternoons, Dr Ang said staff members will have their lunch breaks lasting up to an hour, adding that staggered breaks will be introduced depending on the crowd size.

The PPV, which started by administering an average 2,600 doses daily, ramped up vaccinations to 5,200 doses from July 5.

The vaccination rate is affected when recipients declined a particular vaccine allotted to them.

“We also have situations when the person’s risk status on MySejahtera shows a suspected Covid-19 case or being a close contact with symptoms.

“These people are not allowed to enter, so we inform them that their vaccination appointments will be rescheduled by MySejahtera,” said Dr Ang, who is also the chief operating officer (clinical services) of Sunway Medical Centre.

Before closing, he said the team will start to ramp down vaccinations.

“The last appointment (in June) was at 4pm. So by 4.45pm, we started to scale down our operations where the pharmacist will start to monitor and control the open vials.

“In each vial there are six doses. When every dose is used, we only open up one booth to ensure that whatever vaccine that is diluted for the day is used up,” he said, adding that this was to prevent vaccine wastage.

Once the PPV shuts for the day, Dr Ang said clinical wastes such as used vaccine vials as well as personal protective equipment (PPE) are disposed into a yellow bag, and needles and syringes into sharp bins.

He said the wastes are safely kept in a secured holding area for the Petaling district health office team to collect on a weekly basis.

“We also assign our own housekeeping workers who are trained by Sunway Medical Centre. They come every morning to clear or place new waste bags and also end the day by cleaning up and placing the waste at the designated holding area,” he said.

While the waste management is being handled, Dr Ang said the other team members will tabulate remaining doses and send out reports to ProtectHealth Sdn Bhd and the Covid-19 Immunisation Task Force.

ProtectHealth is a not-for-profit wholly-owned subsidiary of the ministry and is the appointed implementer of private medical practitioner participation in the National Covid-19 Immunisation Programme.

Dr Ang said the pharmacist on duty will also send reports to the Selangor Health Department and the district health office for the purpose of usage monitoring and to secure future allocation.

“We collect reports from various station masters such as the pharmacists, and doctors too. The doctors tabulate the number of people who were unfit for vaccination after the counselling session as well as those who need to be referred to hospital for their vaccination,” he said.

Dr Ang said leftover vaccines are stored at Sunway Medical Centre as it has a pharmaceutical fridge equipped with all the safety alarm systems.

Alternatively, he said the pharmacist liaises with his or her MOH counterpart to decide if they should return the vaccines.

On medical emergencies caused by allergies, he said there is a consultant emergency physician on standby overseeing at least three medical officers and nurses at the observation area.

“We administer the necessary allergic medication, stabilise the person and send him or her to hospital. Our medical officers accompany them in the ambulance. We usually send the patient to a designated public hospital but some do request to be sent to a hospital of their choice,” he said.

Dr Ang said the PPV, which started operations in March, is initially run by the Petaling district health office to vaccinate frontliners.

Sunway Medical Centre took over on June 21 after it was appointed by ProtectHealth to vaccinate the public. Since March, it has administered more than 100,000 doses.

The second phase began on April 19 involving the elderly, disabled and those with comorbidities while the third phase, which is ongoing, involves those aged 18 and above.

Under Phase Four, the government also launched the Public-Private Partnership Industrial Covid-19 Immunisation Programme (Pikas) to ramp up the vaccination process for those in the critical economic sectors.

On July 3, National Covid-19 Immunisation Programme coordinating minister Khairy Jamaluddin said that there are a total of 1,400 PPV operating nationwide.

He also said that more than 1,500 general practitioner clinics and 120 private hospitals will also be operating as PPV.

Setting up NOC like in 1969 will not be suitable, says PM’s aide