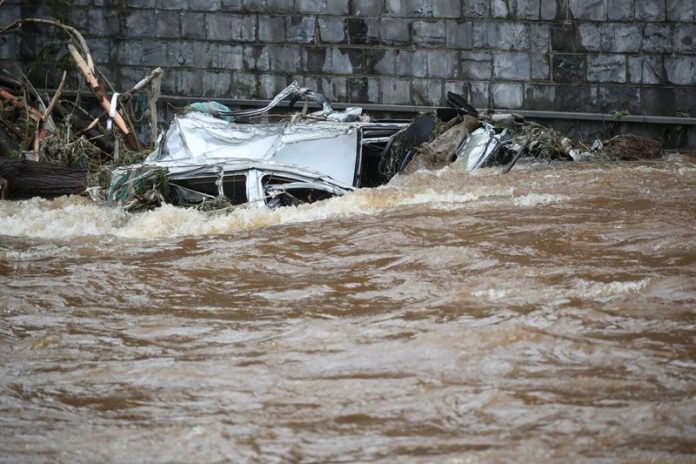 BRUSSELS (Reuters) -Belgium’s crisis centre urged people in the south and east of the country to avoid all travel on Friday as the death toll from swollen and burst rivers and flash floods rose to 14.

A week of rain finally came to an end, but several communities across parts of Belgium were nervously watching as the river Meuse, which flows through the city of Liege in eastern Belgium, continued to rise and threatened to overflow.

In the town of Maaseik, on the Dutch border, the Meuse had risen beyond a retaining wall and was spilling past bags placed on top.

Several towns and villages were already submerged, including Pepinster near Liege, where around 10 houses partially or fully collapsed. Belgian media put the death toll at least 14 people, with a further four missing.

The crisis centre, which is coordinating rescue efforts together with regional authorities, said many roads were blocked or dangerous.

It said France, Luxembourg, the Netherlands, Austria and Italy had provided assistance and personnel, including rescuers, boats, helicopters and all-terrain vehicles.

More than 20,000 people in the southern region Wallonia were without electricity. Others lacked clean water. Thousands of residents have been evacuated from low-lying areas.

Large parts of the rail network in southern Belgium were unusable, with certain sections of track swept away. High-speed train services to Germany were also suspended, with disruption expected to continue into Saturday.

High prices for CPO to continue

WHO’s Tedros warns in opposition to over-reaction to Omicron

Britain says Taliban should not be recognised as Afghan government