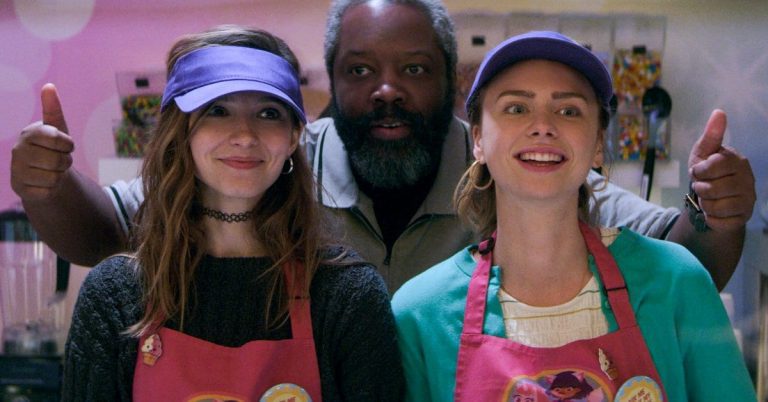 The dog days of August were made for exploding-car blockbusters. Unfortunately, prudent movie lovers have been forced to survive the endless-in-a-bad-way summer of 2020 without the consolation of cinemas and their wonderfully aggressive HVAC systems. As if to compensate, a traditionally sleepy month for the small screen instead offered up a cornucopia of delightful, relatively light new viewing options—rude British comedies, lovable coming-of-age stories, socially conscious pulp horror, a true-crime caper that might just make your cheer. Also: a deeply upsetting but wholly essential docuseries on the immigration system. Looking for more TV recommendations? Here are my favorites from July, June and the first half of the year.

This explosive documentary series from Trophy co-directors Christina Clusiau and Shaul Schwarz offers a complex, 360-degree view of the American immigration system, combining in-depth research, empathetic storytelling and bold investigative journalism into a uniquely urgent humanitarian appeal…As damning for the executive branch as it is illuminating for civilians, Immigration Nation is easily the most important TV show of the year.

Beginning in 2017, the filmmakers spent three years following people on all sides of the immigration crisis, from families separated at the border, migrant workers and refugees to lawyers and activists. They were given surprising access to ICE—interviewing officers, filming inside detention centers and even riding along on raids. At first, this intimacy can be disconcerting. The series opens with the staff of ICE’s New York City Field Office carrying out operations and complaining that they’ve been called racists as protesters amass outside their headquarters. Viewers who objected to the pro-police sympathies of newly canceled shows such as Cops and Live PD, as I did, might worry that the filmmakers will dehumanize undocumented immigrants. But this introduction is something of a fake-out. By showing us how they documented ICE officers without apparent judgment, Clusiau and Schwarz demonstrate how they were able to witness the agency at its most alarming. [Read TIME’s full review.]

A smart, gripping, 10-episode drama adapted by showrunner Misha Green from Matt Ruff’s 2016 novel, Lovecraft Country shares her fellow executive producer Jordan Peele’s fascination with examining race, and Blackness in particular, through the lens of horror. But it is specifically concerned with how the values of influential storytellers like H.P. Lovecraft—the father of cosmic horror and an author known for exploring the decline of civilization, the apathy of the universe and a fictionalized New England landscape nicknamed Lovecraft Country, as well as for his virulent racism—interact with the diverse world their works are released into. [Read the full review.]

Filmmaking duo Heidi Ewing and Rachel Grady (Jesus Camp, One of Us) probe the strange case of Richard Scott Smith, a man who marries women and drains their bank accounts before moving on to his next target. True-crime fans will surely hear echoes of Dirty John, the hit podcast turned Bravo docudrama about a wealthy businesswoman who weds the doting doctor of her dreams, only to realize he’s actually a litigious, violent ex-con. But while that story asks how such an apparently savvy, successful woman could allow herself to be so catastrophically misled, Love Fraud’s aim is to restore the dignity of Smith’s victims. With help from the directors and a bounty hunter named Carla who seems destined to be the show’s breakout star, several of them band together to take him down. [Read the full review.]

The Other One (Acorn)

Not to be confused with Comedy Central’s madcap music-industry spoof The Other Two, this family comedy of sorts opens with patriarch Colin Walcott unwittingly walking into his surprise birthday party with his longtime mistress Marilyn (Happy Valley star and Downton Abbey alum Siobhan Finneran) on his arm—and then literally dying of shock. His wife Tess (Rebecca Front, best known in the U.S. for her roles in The Thick of It and Avenue 5) and 20-something daughter Catherine (Ellie White of The Windsors) soon learn that he and Marilyn had a 20-something daughter… also named Catherine (Lauren Socha from Misfits). Suddenly, the stuffy, middle-class Walcotts and their crude, working-class counterparts are something like family. And in the meantime, Tess throws herself into online dating in a bitter attempt to even the sexual score with her late husband. American network television could never be trusted to wring something worth watching out of such a ridiculous premise. But thankfully, The Other One is a BBC production stacked with top-shelf comic actors, as well as a welcome throwback to joke-stuffed, class-conscious, pre-Fleabag Britcoms like Keeping Up Appearances and Gavin & Stacey.

Meanwhile, from the realm of decidedly post-Fleabag British comedy comes this simultaneously funny, filthy and poignant Channel 4 import about a young woman who is pathologically obsessed with sex. Relative newcomer Charly Clive gives a daring, empathetic and extremely likable performance as Marnie, a small-town Scot whose quirky demeanor conceals an affliction that may sound like a joke but is actually wreaking havoc on her aimless, post-collegiate existence. Everywhere she goes, the mere sight of human flesh—a muscular torso, a low neckline, a saggy double chin—triggers her involuntary fantasies. A traumatic vision at a party for her parents drives Marnie to hop a bus to London, where she experiments with her sexuality, takes tentative steps toward a career as a writer and seeks help to overcome a debilitating mental illness that she struggles to identify or understand. Based on a memoir of the same name by Rose Cartwright, Pure grounds its racy premise in the emotional realism of a character living with undiagnosed OCD and puts a fresh spin on the old story of a misfit moving to the big city to become the person she was always meant to be.

I’ll be honest: I didn’t expect much from this show, whose title suggests a B movie of Mystery Science Theater 3000 proportions. But it turns out to be a deeply charming action comedy that combines the far-better-than-it-needs-to-be tradition of quippy teen procedurals like Veronica Mars and Buffy the Vampire Slayer with the gentle Christian-youth satire of the cult movie Saved! (Yes, the early-2000s vibes are strong in this one; no, I am not ready for Y2K nostalgia but will forgive it in this instance.)

Maddie Phillips (Ghost Wars) and Anjelica Bette Fellini (The Gifted) are outstanding as a pair of fraternal twins in a rich, white, conservative corner of Atlanta who couldn’t be more different but adore each other anyway. Phillips’ Sterling is a perky achiever with a longtime boyfriend and a prominent place at their ritzy Christian high school; Fellini’s Blair is the sardonic, rebellious self-proclaimed “slutty twin.” And through a series of forgivably unbelievable events, the girls wind up assisting a burned-out yet essentially kind bounty hunter (Kadeem Hardison, a.k.a. A Different World‘s Dwayne Wayne) and covering up their less-than-legal internship with after-school jobs at the frozen yogurt shop he manages. Unlike so many Trump-era comedies, Teenage Bounty Hunters manages to critique the Christian right without condescending to its characters or belittling their beliefs. Instead, the show proposes a different kind of religious observance—one that feels inclusive, sex-positive and thoroughly modern.