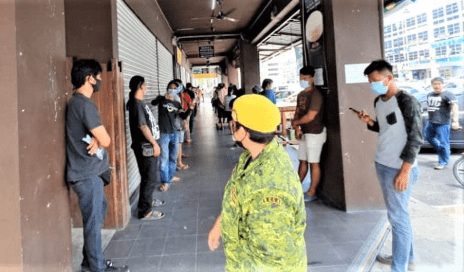 MIRI: Bank Simpanan Nasional (BSN) at Miri Waterfront Commercial Centre has implemented a numbering system for those queuing up to claim their vouchers for the Bantuan Prihatin Nasional (BPN) and Sarawakku Sayang aid.

Miri district police chief ACP Lim Meng Seah said, “This is so that they can know roughly know when it is their turn to collect their vouchers and they do not have to wait very long.

“For those who cannot wait, the bank will give them number for the next day so that they will know what time to arrive at the bank.”

He noted that more than 300 people were seen queuing up as early as 7am to cash out their vouchers from the bank.

“I am satisfied to see that they have complied with the social distancing rule, even though the queue was nearly 500m long.

“However, if the weather is particularly hot, they will move up a little closer to each other,” he said when met by reporters at BSN Miri Waterfront Commercial Centre branch yesterday.

Asked whether there is a different system for the people to claim their money through SarawakPay or Boost applications, Lim pointed out that some of them do not have a bank account and they will be given cash vouchers instead.

How the Winter Olympics are under threat from climate change

Is our drinking data-driven?