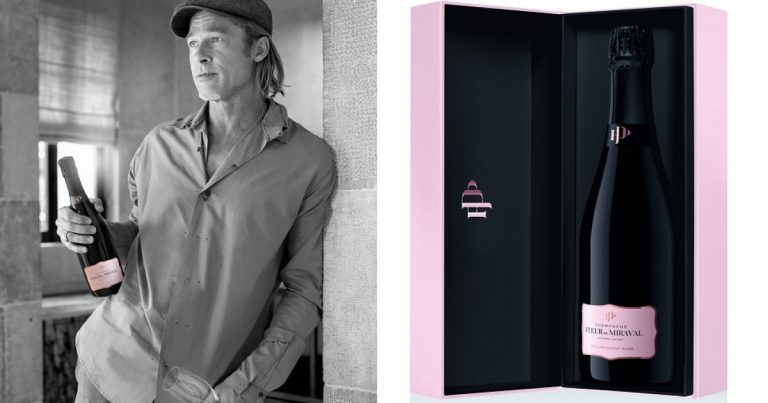 LOS ANGELES, Sept 2 — Fans of the Hollywood star, Brad Pitt, will soon have a chance to savor the first ever rosé champagne launched by the American actor. Christened Fleur de Miraval, the new bubbly will be available from October 15.

No longer content to be a mere producer of rosé de Provence, the hero of The Curious Case of Benjamin Button is branching out into the champagne business in partnership with the Péters family.

As you can imagine, Brad Pitt has not chosen to work with just any champagne producer.

The Péters, who own 20 hectares of vines in the much-sought after côte des blancs in and around the grand-cru village of Mesnil-sur-Oger, already export bottles with Pierre Péters label to 70 countries all over the world.

This is not Brad’s first foray into the wine business. Having bought a 1,000-hectare estate in Correns in the French Var region for 35 million euros in 2011, Brad and his ex-wife Angelina Jolie set about developing it with help from the Perrin family back in 2012. The result of their efforts was the remarkably successful and critically acclaimed Miraval rosé de Provence.

And the Perrin family once again figures large in this latest initiative, having put Brad Pitt in contact with the Péters to develop a rosé champagne. The new bubbly, which will reportedly be christened Fleur de Miraval, will be a blend of 75 per cent chardonnay and 25 per cent pinot noir. However, there has been no mention of Angelina in the mix.

Red currant, raspberry, with a lingering salt finish… This is how tasters have described Brad Pitt’s first ever sparkling vintage. The champagne is also presented in an elegant all-black bottle, which protects the tipple from damaging ultraviolet light.

Only 20,000 bottles of the new champagne have been produced. But there is already talk of a second vintage given that the Péters have been referring to the bubbly as a first edition. — AFP-Relaxnews