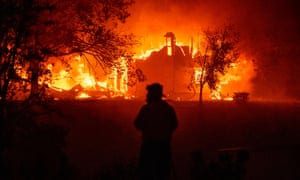 Dozens of fires are raging across California, forcing tens of thousands of residents – who were already facing rolling blackouts and the coronavirus pandemic – to flee their homes. The flames, sparked by lightning and stoked by a searing heatwave and ferocious winds, have been moving quickly, overwhelming the state’s firefighters and first responders.

“It’s kind of an overwhelming fire siege,” said Daniel Swain, a climate scientist at UCLA’s Institute of the Environment and Sustainability.

A cluster of wildfires in Napa, Sonoma, and Solano counties now covers an estimated 46,225 acres, according to Cal Fire, the state’s fire agency. The flames have destroyed at least 50 buildings and structures and remain largely uncontained, and come just three years after devastating fires killed 22 and destroyed many wineries in the region. At dawn on Wednesday, firefighters and police officers went door-to-door in Vacaville, in Solano county, rushing to evacuate residents. At least 50 structures were destroyed and four people were injured, according to officials. Television reporters and local residents shared images of roads, fully flanked by flames, blackened land and columns of smoke swirling through neighborhoods.

The ash and soot, which have permeated through the state are especially concerning amid the coronavirus pandemic – as evidence builds that air pollution makes people more susceptible to Covid-19.

In southern California, the Lake Fire north-east of Los Angeles has been raging for more than a week, has spread across more than 21,000 acres. The Dome fire has eaten through more than 43,000 acres including the Mojave national preserve near the California-Nevada border – scorching ancient Joshua Trees.