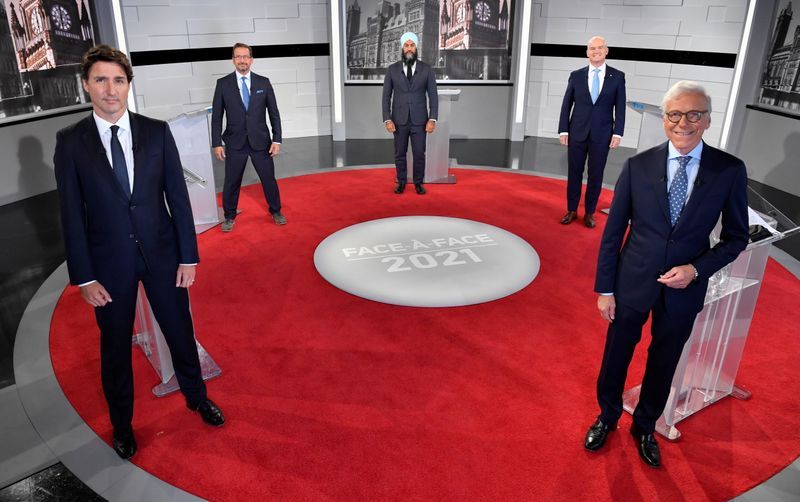 MONTREAL (Reuters) – Canadian Prime Minister Justin Trudeau, struggling ahead of a Sept. 20 election, came under concerted fire at a debate on Thursday from opponents who said he had no business calling an election during the COVID-19 pandemic.

Trudeau triggered the vote last month when he was well ahead in opinion polls, saying Canadians needed to decide whether the Liberal government was right to spend billions of dollars to protect people and businesses from the pandemic.

But surveys show that Trudeau’s Liberals have now slipped and are neck and neck with the Conservatives of Erin O’Toole.

“This is not the time for an election, during a pandemic,” O’Toole told the French-language debate, the first of three such televised encounters among party leaders. O’Toole said the government had not been able to focus fully on the crisis in Afghanistan and forest fires in British Columbia.

Jagmeet Singh, leader of the left-leaning New Democrats, who compete with the Liberals for the same set of voters, said: “Now is not the time for an election. I think it’s futile.”

Liberal insiders say public unhappiness with the election, which is taking place two years early, is partly responsible for the party’s slow start.

They also cite voter fatigue with Trudeau, who took power in late 2015 and retained office with a minority government in 2019.

“We’re not doing this in two years’ time, or even in a month, but right now,” he told the debate, which was hosted by private Quebec network TVA. The predominantly French-speaking province accounts for 78 of the 338 seats in the House of Commons and is crucial for any party seeking office.

The leaders’ debates can be decisive. During the 2019 TVA debate, Trudeau and other leaders accused then-Conservative leader Andrew Scheer of plotting curbs on abortion. Scheer became flustered and his campaign never recovered.

The Liberals hold 35 Quebec seats and say they are confident of picking up more from the separatist Bloc Quebecois and the Conservatives.

That Tweet About Joe Biden and Mr. Rogers Has a Long History