IT all started with a simple request from a stranger on Instagram in October 2020.

The stranger sent me a private message asking for help. He was in a location that was under a strict lockdown due to the high number of Covid-19 cases, and they had no access to hand sanitiser or face masks. I knew I had to help him.

That same afternoon, I posted on Instagram that I was going to help raise funds for hand sanitiser and face masks for the needy, and anyone who wanted to chip in could pledge their donations to me privately. I would pay for the items first and they could reimburse me later.

The next morning, I woke up to a sea of messages. In less than 24 hours, I had raised RM30,000 – more than enough to buy hand sanitiser and face masks for 300 families.

I thought that was the end of it. But people started sharing my post on social media and more pledges started coming in.

I contacted the stranger who had messaged me to find out what else the families needed. He suggested buying formula milk and diapers for families with babies.

I decided to use my social media to contact suppliers and people in the community to find the best deals for these items, and I believe a lot of people resonated with that.

But it was my family friend Raja Noor Akmar Raja Kamil, a Sarawak Women and Family Council member, who inspired me to start Kuching Food Aid.

Raja Noor is known for helping the underprivileged in her community. She took me under her wing when I told her that I really wanted to visit underprivileged families with her.

So I packed five food aid boxes and went with her to deliver them to the families.

It was a traumatising experience. I knew that these families needed help, but I had not realised just how bad their living conditions were. 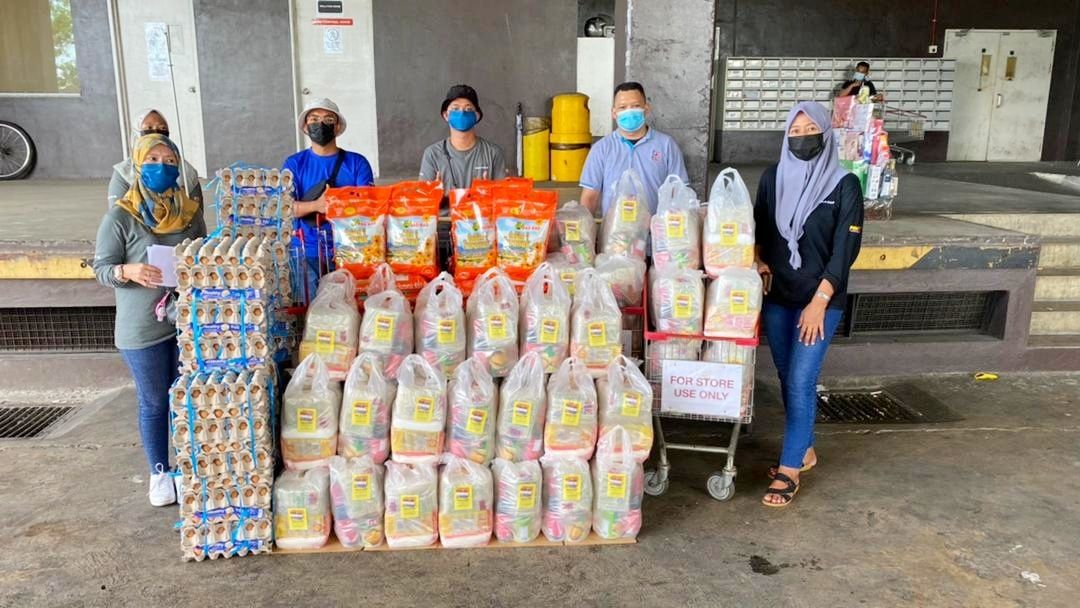 It was a turning point for me and I felt a sense of urgency to get more aid out to the poor.

Initially, my family members and I did all the aid packing. There were 22 of us, including my two children, nieces and nephews, brothers-and-sisters-in-law and mother-in-law.

But I knew I needed to show transparency because when I give money to a charity, I too want to know where my money is going, how effective it is and whether it gets to the end goal.

With that in mind, I shifted from packing aid personally to working with supermarkets.

But getting volunteers to pack the aid themselves isn’t the most practical solution.

Logistically, it’s difficult to go to the various suppliers and collect the aid from different places, and then find another location to pack it in. There are also security issues to consider.

I wanted to create a system that was self-sufficient so that the community could buy aid at a local supermarket to help people in need.

The supermarket packs the aid before the volunteers pick it up and send it to the families.

The aid is vetted and vouched for by the volunteers. We also cross-check to make sure that we only send to areas that government aid hasn’t reached so that there is no duplication of resources.

Instagram is our main way of fundraising and getting “digital volunteers” on board.

Whether they are influencers or business owners, something about the call to action resonated with them enough to spread the word.

It’s also encouraging to see businesses give back in a small way.

All the businesses connected to Kuching Food Aid have been contributing 5% of their profits to the initiative.

We don’t discriminate when it comes to who we help. We’re not politically or racially motivated. The aid goes to people who really need it, specifically those who ask for help.

We have volunteer case workers who will check up on the families and find out what their situation is.

Sometimes we decide not to send aid after finding out that the requester still has a job.

The majority of the families whom we send aid to are those who have completely lost their income. They are in a vulnerable and desperate situation.

Although some families do eventually stop needing aid, the long lockdowns has made that difficult.

When I left Kuching to return to Sydney, Australia, in January this year, it was with a heavy heart.

I thought that would be the end of Kuching Food Aid, but the opposite has happened.

When I returned to Sydney, I found that I was able to do far more in terms of fundraising by not being on the ground.

In some ways, being based so far away has actually inspired me to focus more on helping my fellow Sarawakians.

I also realised that there are many other areas like Miri, Bintulu, Sibu, Bingangor, and Mukah that also need help.

I don’t really have a goal for Kuching Food Aid. To be completely honest, I wish it didn’t have to exist and that everyone could have enough food to eat.

But what I love about it is that it’s a community-driven initiative and that the community is dictating the future of Kuching Food Aid.