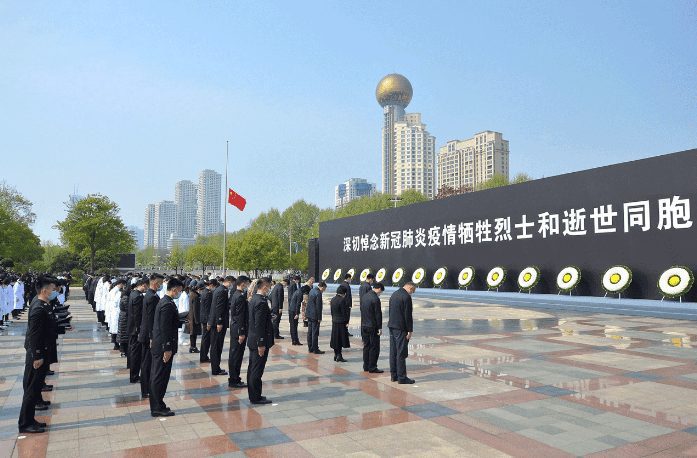 WUHAN, China: China came to a standstill yesterday to mourn patients and medical staff killed by the coronavirus, as the world’s most populous country observed a nationwide three-minute silence.

At 10am (0200 GMT), citizens paused, cars, trains and ships sounded their horns, and air-raid sirens rang out in memory of the more than 3,000 lives claimed by the virus in China.

In Wuhan — the city where the virus first emerged late last year — sirens and horns sounded as people fell silent in the streets.

Staff at the Tongji Hospital stood outside with heads bowed towards the main building, some in the protective hazmat suits that have become a symbol of the crisis worldwide.

“I feel a lot of sorrow about our colleagues and patients who died,” Xu, a nurse at Tongji who worked on the frontlines treating coronavirus patients, told AFP, holding back tears.

“I hope they can rest well in heaven.”

Workers in protective wear paused silently beside barriers at one residential community — a reminder that there are still tight restrictions on everyday life across Wuhan.

National flags were lowered to half-mast across the country, including in the capital’s Tiananmen Square.

Experts: Focus on unvaccinated, but obtain extra doses as soon as possible