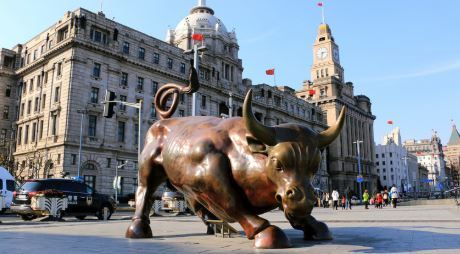 The gains came after a three-day losing streak, with the CSI300 falling the most in two months on Wednesday.

Growth in China’s factory output slowed for a third straight month in May, likely weighed down by disruptions caused by COVID-19 outbreaks in the country’s southern export powerhouse of Guangdong.

The U.S. Federal Reserve on Wednesday began closing the door on its pandemic-driven monetary policy as officials projected an accelerated timetable for interest rate increases.

Vice Premier Liu He, China’s economic czar, has been tapped to spearhead the development of so-called third-generation chip production and lead the formulation of policy support for the technology, Bloomberg News reported.

Though concerns over domestic valuations remained a focal point for investors.

“The root cause for the recent correction was high valuations, as many Chinese institutional investors switched out of expensive stocks to prepare for a year-end ranking,” said Dong Baozhen, chairman of Beijing-based private securities fund Lingtong Shengtai Investment Management.

“There is co-existence of extremely high valuations and extremely low valuations in the A-share market, which needs to be corrected,” he said. – Reuters