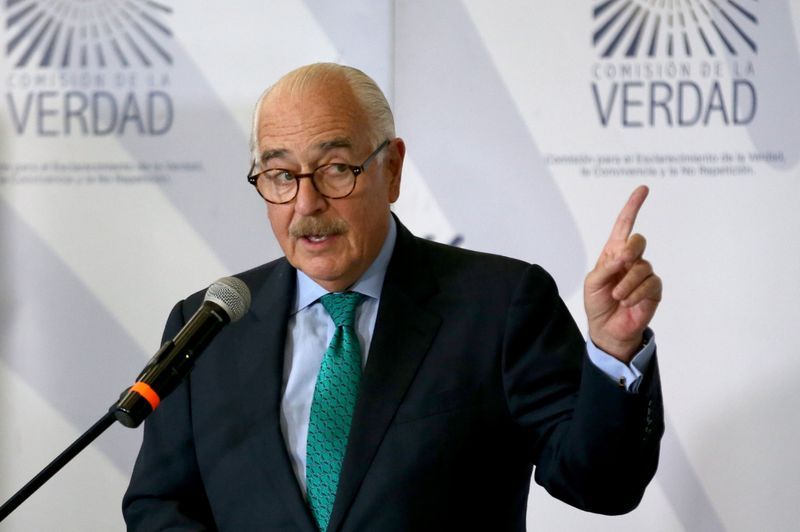 BOGOTA (Reuters) – Colombia’s ex-President Andres Pastrana said on Tuesday his government had laid the ground work for building peace in the South American country, even though he did not reach an agreement with leftwing guerrillas and rightwing paramilitaries.

Pastrana, who governed Colombia between 1998 and 2002, became the fifth ex-president to testify before the country’s truth commission, which was established as part of a 2016 peace agreement with the now-demobilized rebel group the Revolutionary Armed Forces of Colombia (FARC).

Former presidents Ernesto Samper and Juan Manuel Santos previously testified publicly, while Cesar Gaviria did so in private. Alvaro Uribe, one of Colombia’s most polarizing politicians, spoke informally to the truth commission’s president, Francisco de Roux, at his estate in mid August.

“Above all I am here because I am a believer in peace, no one doubts that I invested all my political capital in seeking it. I know that without truth we will not find peace. The victims will only forgive with truth, with real truth, without political bias,” Pastrana said.

Colombia has struggled with decades of bloody civil strife and drug violence that the 2016 peace agreement has diminished but not ended.

Pastrana, 67, began more than three years of unsuccessful peace talks with the FARC during his government, and also approached the National Liberation Army (ELN), another leftist rebel group, and the rightwing paramilitary group the United Self-Defense Forces of Colombia (AUC), also without success.

The AUC later demobilized under Uribe, though many of its former members joined drug-trafficking groups.

Pastrana also recalled how he led a process of strengthening Colombia’s armed forces via Plan Colombia, which had U.S. support.

“Of course, we could have made mistakes, we are all human and if our mistakes affected victims, I’m sorry – we must ask forgiveness,” he said.

The former president also warned Colombia – one of the world’s top producers of cocaine – will not reduce violence or achieve peace if it cannot tackle drug trafficking.