MyWinet Daily News at Your Fingertips
Home English News Companies like Hudson and McDonald’s are testing drive-thru AI, invisible checkout in Chicago. Here’s what that means for jobs – and privacy 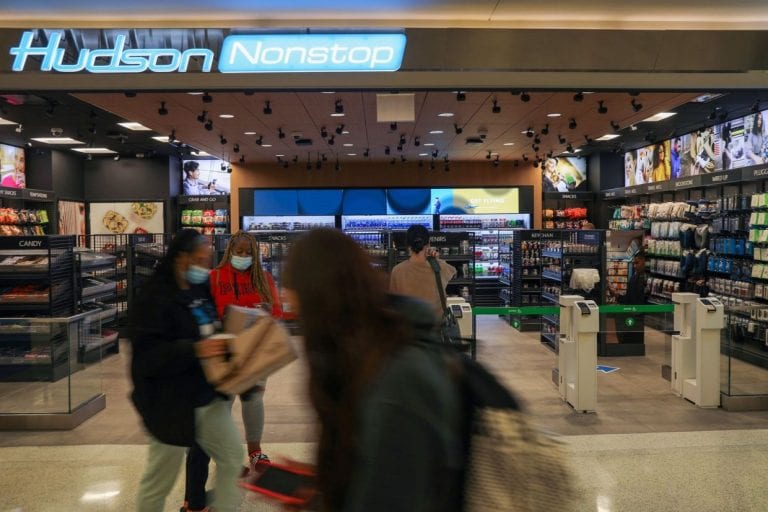 Travelers at Midway Airport may notice something strange about one of its Hudson convenience stores: the cash register is missing.

The Hudson Nonstop store uses technology Amazon developed for its cashierless Amazon Go stores to automatically bill shoppers when they walk out. Instead of manning cash registers, two employees keep shelves stocked and coach travellers on how to navigate the store, occasionally reassuring them they can simply leave with their purchases.

Shoppers have been interacting with technology like self-checkout machines and automated customer service hotlines for years. But there are new tools taking on tasks workers used to do, from the retail sales floor to the restaurant drive thru, raising questions about what that technology means for jobs.

Also, some of the new capabilities rely on technologies that could raise concerns about customer privacy, from camera systems that follow shoppers’ every move and artificial intelligence at drive-thru to the use of biometrics like palm prints.

“There’s no question some of these tasks have gone away, but in total it hasn’t had the overall impact of reducing the amount of work getting done,” said Tom Kilroy, senior partner at consultancy McKinsey & Co.

In some ways, the Covid-19 pandemic made automation even more appealing. A robot workforce doesn’t need to social distance or count against capacity limits, and technology that makes workers more efficient could help employers struggling to hire workers quickly.

More than half of US companies surveyed said they plan to accelerate the automation of tasks as a result of the Covid-19 pandemic, according to an October report from the World Economic Forum. The same report found that worldwide, automation is expected to create more new jobs than it replaces by 2025, though those new jobs may require additional skills.

“Eatertainment” chain Dave & Buster’s plans to have contactless service, which lets customers place orders on a mobile device instead of waiting for a server, in all locations by the end of July. Servers are getting mobile devices to handle payments.

“It’s really helped us as we’re trying to staff up our stores to meet the demand and the volumes that we’re seeing,” Chief Financial Officer Scott Bowman said at an investor conference last month

Customers swipe a credit card to enter through a gate. Cameras covering the ceiling work with sensors on store shelves to add items to virtual shopping carts as customers pick them up.

“You don’t need to worry about checking out at the end,” said Amber Nicole, 36, of Atlanta, who picked up a bottle of water and souvenir shot glass before a flight at Midway in June.

Midway’s Hudson store isn’t the only place Chicago consumers may run into technology handling a task a person used to do. At about ten Chicago-area McDonald’s restaurants, the fast food chain is testing a system that uses artificial intelligence to take customers’ drive-thru orders.

A female-sounding voice asks follow-up questions when needed, like inquiring whether a customer buying a cup of coffee wants cream or sugar. Orders are displayed on a digital screen so customers can make sure the system heard correctly before pulling ahead to pay.

The system gets orders right about 85% of the time and doesn’t appear to be affecting customer satisfaction ratings, McDonald’s CEO Chris Kempczinski told analysts last month.

At least one customer, however, alleges the system is violating Illinois’ biometric privacy law by collecting his voiceprint.

The law mandates that companies collecting information like facial, fingerprint and iris scans, as well as voiceprints, obtain prior consent from consumers, detail how they’ll use the information and specify how long it will be kept.

McDonald’s, which is seeking to dismiss the case, said its system is not used to identify customers and does not store voice features or voiceprints that identify people.

White Castle, also experimenting with automated ordering at the drive-thru, said it does not collect voiceprints either. Customers can opt in to have a license plate reader recognise their car.

The chain uses the technology at its Merrillville, Indiana, restaurant, which is also testing a kitchen robot called Flippy that has been frying up french fries, mozzarella sticks and Chicken Rings since last fall.

White Castle is still testing both technologies, but the goal is to free up workers to spend more time on customer service or managing the flow of orders, not replace them, said Jamie Richardson, vice president of marketing and public relations at White Castle.

“It is hard to hire now, so if you can run a shift with fewer people it’s helpful, but when we started these conversations the industry wasn’t facing the same challenges,” he said.

Automation technology is quite costly, and not every tool a retailer tests sticks around. McDonald’s has spent “a lot of money” testing high-tech tools like automated fryers and grills, but most don’t cut labour costs enough to offset the price tag, Kempczinski said during the conference with analysts last month.

Walmart abandoned robots that scanned shelves for items in need of restocking after finding employees could handle the task in roughly the same amount of time, spokeswoman Camille Dunn said. Automated Pickup Towers, where customers could retrieve online orders, have also been sidelined because customers preferred curbside pickup, though Walmart is evaluating how they can be repurposed, she said.

But other innovations have caught on. They rarely replace workers altogether: a 2019 McKinsey report estimated about half of activities in the retail industry can be automated with current technology, but only 5% of jobs can be fully automated.

“It’s not a situation where the machines have taken over. It’s more a story of jobs evolving and changing than going away,” Kilroy said.

Sometimes that means workers oversee machines, like the grocery store employees who monitor and troubleshoot self-checkout machines. In other cases, retailers have them focus on tasks requiring social interaction or other new, in-demand roles, like picking out items for online orders.

“The lesson of self-checkout is that all this technology still requires a substantial amount of human labour to back up these systems,” said Lisa Kresge, research and policy associate at the UC Berkeley Center for Labuor Research and Education.

The question is whether there will be a “tipping point” where technology handles enough work that companies can consolidate jobs and shrink their headcount, said artificial intelligence and automation expert Martin Ford.

Hudson said its Midway store has the same number of employees as it would with traditional checkout. The company was motivated by convenience, not cutting labour costs, when it decided to use the Amazon Go technology, Schut said. With no checkout counter, there’s less risk of losing a sale if a traveller rushing for a flight can’t afford to wait in line.

Walmart expects to build the automated fulfilment centres at about 100 stores over the next couple of years, and some will also have automated drive-up pickup points, West said.

Like Walmart’s automated fulfilment centres, much of the automation retailers and restaurants are rolling out works behind the scenes, helping manage supply chains and store operations, said Brendan Witcher, e-commerce analyst at Forrester Research.

It’s often designed to help employees work faster or monitor their work, rather than take over tasks they used to do.

Walmart uses artificial intelligence to help employees choose a substitute when an item in a customer’s grocery order is out of stock. Another tool uses augmented reality to map the inventory in a store’s back room and help employees find the items they need faster, spokesman Ravi Jariwala said.

“The idea is to simplify and remove mundane tasks for our associates, so they can focus on higher value-added activities like helping customers, getting products out to shelves or personal shopping,” he said.

Employees may benefit if technology takes over dull, repetitive or physically difficult tasks. But the changes can also make jobs more challenging or raise pressure, said Aiha Nguyen, who leads the Labour Futures Initiative at nonprofit research organisation Data & Society. A store might have artificial intelligence handle simple customer service calls like questions about store hours but save angry callers for employees.

There’s another reason the robots aren’t about to take over: some shoppers just prefer a lower-tech experience.

Some privacy-conscious consumers may be wary of technology that appears to demand too much personal information in exchange for convenience, Nguyen said.

While McDonald’s and White Castle both said their automated drive-thrus do not collect voiceprints, Amazon is using biometric technology at some Amazon Go stores, where customers can use a palm scan to enter. At other Amazon-owned stores, including some Whole Foods, they can present their palm to pay.

None of those stores are in Illinois, but Amazon said it would comply with all federal, state and local laws. Amazon says it deletes customers’ biometric palm data if they choose to quit the service or stop using it for two years. The company also says cameras in Amazon Go stores do not use facial recognition.

The Electronic Frontier Foundation doesn’t oppose businesses’ use of biometrics as long as they first get the customer’s consent and provide a biometric-free option that is just as convenient at no added cost, said Adam Schwartz, senior staff attorney at the San Francisco-based digital rights nonprofit.

Other shoppers may simply prefer a more analogue shopping experience.

Hudson does not plan to turn all of its airport stores into cashierless stores in part because it knows some people will still want to pay with cash or stick with what’s familiar. On a recent day at Midway, some hesitant travellers decided to shop elsewhere.