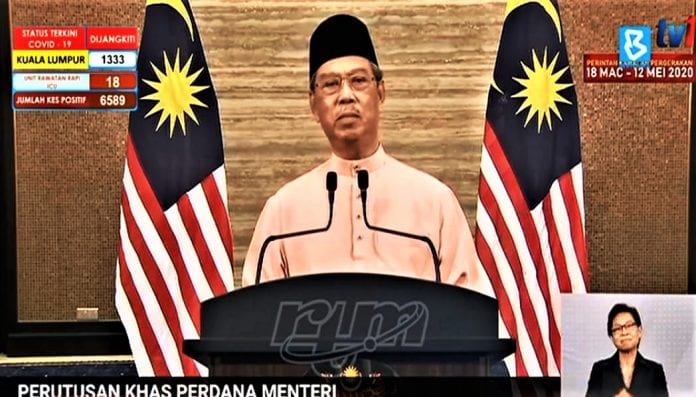 The prime minister said the four-week extension was made on the advice of the Health Ministry (MOH) and the National Security Council (NSC) to curb the spread of Covid-19.

“Our efforts (in fighting Covid-19) have yet to achieve full success. Measures are still needed to fight this pandemic. I also find that the public generally wants the government to continue taking the appropriate measures to fight this pandemic,” he said in a special address aired over national television.

The government had earlier implemented the CMCO from May 4 to 12 to allow almost all economic and social sectors to reopen in a controlled and orderly manner.

Muhyiddin said the extension means that all regulations and standard operating procedures (SOPs) implemented under the current CMCO will remain in force until June 9.

He said any changes to the regulations, SOPs or list of sectors allowed to operate would be announced from time to time.

Conveying his apologies to the people, Muhyiddin said that in the interest of the safety and health of the population, interstate travel to return to hometowns and villages for Aidilfitri is not allowed.

However, Aidilfitri, Pesta Kaamatan or Hari Gawai can still be celebrated by making visits to close neighbours and family members staying in the same state subject to a maximum of 20 people at one time although big feasts or open house cannot be held, he added.