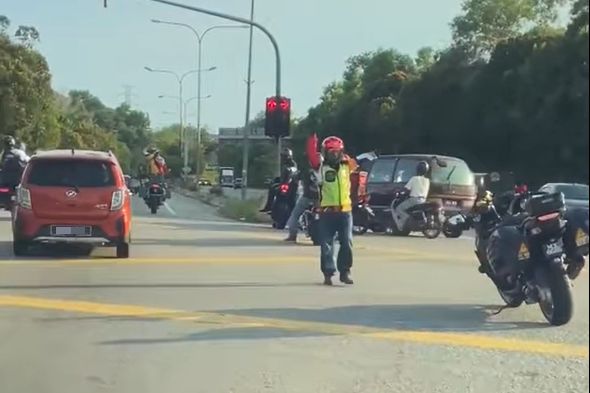 PORT DICKSON: Police are on the lookout for a number of people who stopped site visitors for a convoy of high-powered bikes to move via a site visitors gentle junction right here.

“The people stopped site visitors so a convoy of bikes might move via the junction when the sunshine was pink.

“The motorcyclists got here from the Seremban-Port Dickson Freeway and have been heading in the direction of Bulatan Sunggala in Telok Kemang,” he mentioned in an announcement on Sunday (Nov 21).

Supt Aidi Sham mentioned site visitors can solely be stopped or diverted when a police officer is current.

“With out the presence of a police officer, it’s unlawful to cease or divert site visitors,” he mentioned.

The case, he mentioned, was being probed underneath Part 21 of the Police Act and Part 79(2) of the Highway Transport Act 1987.

Below Part 21 of the Police Act, offenders may be fined as much as RM200 or as much as three months’ imprisonment, or each, upon conviction.

These convicted underneath Part 79(2) of the Highway Transport Act may be fined as much as RM300.

Supt Aidi Sham mentioned these with data on the incident can name the district police station at 06-647 2222.