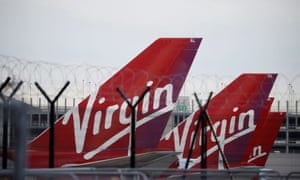 In more airlines news: Delta is set to furlough 1,941 pilots in October, the carrier said in a memo seen by Reuters on Monday that noted the fallout from the Covid-19 pandemic and plunging air travel demand, Reuters reports.

U.S. airlines have warned they will need to furlough tens of thousands of workers once $25 billion in U.S. government stimulus funds run out in September. The aid, which covered employees’ pay, was meant to help them weather the pandemic and preserve jobs until a recovery, but travel remains depressed.

“We are simply overstaffed, and we are faced with an incredibly difficult decision,” Delta’s head of flight operations John Laughter said in a memo to employees.

“We are six months into this pandemic and only 25% of our revenues have been recovered. Unfortunately, we see few catalysts over the next six months to meaningful change this trajectory.”

Virgin Atlantic’s creditors will vote on a £1.2bn (US$1.6bn) rescue plan on Tuesday in a crucial test of the airline’s ability to survive in an industry devastated by the Covid-19 pandemic, Reuters reports.

Virgin Atlantic agreed the deal with shareholders and creditors in July to secure its future beyond the coronavirus crisis.

The airline, which is 51% owned by Richard Branson’s Virgin Group and 49% by US airline Delta, said it remains confident in the restructuring plan and is on track to finalise its solvent recapitalisation in the first week of September.

Tuesday’s vote of affected trade creditors includes nearly 200 suppliers that the airline owes more than 50,000 pounds to. It needs 75% support of the overall outstanding value of money owed at a hearing at London’s High Court.

If successful, another UK court hearing will be held on 2 Sept to approve the plan, and a procedural hearing is scheduled for Sept 3 in the United States.

Should the creditors fail to support the plan, the judge can still rule that it is in their interests for it to go ahead.

Virgin Atlantic has had to close its base at London’s Gatwick Airport and cut more than 3,500 jobs to contend with the fallout from the Covid-19 pandemic, which has grounded planes and hammered demand for air travel.

Global airline body IATA has said that the industry will not return to pre-crisis levels until 2024.

In the UK, stress and exhaustion from the Covid-19 crisis threaten to intensify burnout among women working in the NHS just as it prepares to resume most services, according to a survey that has prompted calls for greater support for female staff.

The pandemic had amplified alleged bullying, sexism and racism on the part of managers, , some workers also warned, while 26% of women said they did not feel safe sharing personal concerns with their boss.

This was especially true for staff from a minority ethnic background, who also reported feeling traumatised by the disproportionate impact of the virus, said the Health and Care Women Leaders Network of the NHS Confederation, which carried out the survey:

Dr Anthony Fauci, the top US infectious diseases expert, is warning that distributing a Covid-19 vaccine under special emergency use guidelines before it has been proved safe and effective in large trials is a bad idea that could have a chilling effect on the testing of other vaccines, Reuters reports.

Scientists and health experts have expressed concern that President Donald Trump will apply pressure on the US Food and Drug Administration to deliver a vaccine before November to boost his chances of re-election.

Fauci, the director of the National Institute of Allergy and Infectious Diseases, declined to comment on the president, but said there are risks in rushing out a vaccine despite the urgent need.

“The one thing that you would not want to see with a vaccine is getting an EUA (emergency use authorisation) before you have a signal of efficacy,” Fauci told Reuters in a phone interview.

“One of the potential dangers if you prematurely let a vaccine out is that it would make it difficult, if not impossible, for the other vaccines to enroll people in their trial,” Fauci said.

In the UK, some families have abandoned balanced meals for lack of money during the coronavirus crisis, while many have faced physical and mental problems, according to a report.

Researchers from the Child Poverty Action Group (CPAG) and the Church of England (C of E) spoke to parents who said they had been forced to sell possessions to protect their children’s quality of life, and found that 80% of poorer families surveyed felt they had become worse off financially since the lockdown began.

The findings underline the disproportionate strain being placed on the poorest households as the UK struggles to deal with the pandemic. In June the Resolution Foundation said that while many low-income families were turning to credit cards to get by under lockdown, many higher-income households were able to save more money as their costs fell:

‘Very low evidence’ for plasma therapy authorised by Trump — WHO

In case you missed this in the earlier blog:

Donald Trump on Sunday announced the emergency authorisation of convalescent plasma, a method involving taking plasma from people who have recovered from Covid-19, for coronavirus patients.Dr Soumya Swaminathan, chief scientist at the WHO, stressed that it was still unproven and that there was “very low evidence” it was safe and effective.

“There are a number of clinical trials going on around the world looking at convalescent plasma … but only a few of them have reported on results. The results are not conclusive. The trials have been relatively small and the results in some cases point to some benefit but have not been conclusive. We have been tracking this and do ongoing … reviews to see where the evidence is shifting or pointing at and the moment it is still very low evidence,” she said.

Dr Bruce Aylward, senior adviser to the director general of the WHO, warned that the side-effects of convalescent plasma ranged from mild chills and fevers to more severe lung problems and circulatory overload.”

Hello and welcome to today’s live coverage of the coronavirus pandemic with me, Helen Sullivan.

I’ll be bringing you the latest news from around the world. Get in touch:

Twitter: @helenrsullivan
Email: [email protected]
The first cases of coronavirus have been detected outside of quarantine facilities within the Gaza Strip, Palestinian officials have announced, a potentially disastrous development given the enclave’s fragile health system.

Four people from the same family have so far tested positive for coronavirus, Gaza’s interior ministry said, as authorities imposed a 48-hour lockdown.

The immediate shutdown includes the closure of workplaces, schools and mosques.

Gaza has been under a crippling Israeli blockade since 2007 and access to the enclave was further restricted following the onset of the coronavirus pandemic. Those granted permission to enter the strip have been held in special quarantine centres for three weeks.

Here are the key developments from the last few hours:

Sendgrid Under Siege from Hacked Accounts — Krebs on Security