Covid-19: Number of cases drops to double digits, so continue complying with MCO 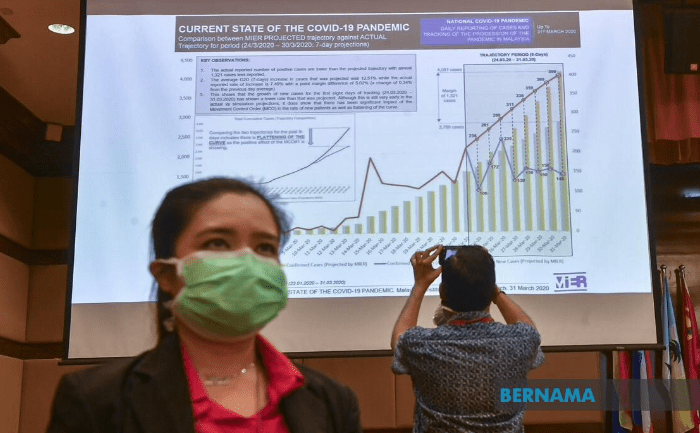 Covid-19: Number of cases drops to double digits, so continue complying with MCO

KUALA LUMPUR: After a month of the Movement Control Order (MCO) which was introduced on March 18, the government’s efforts to break the chain of Covid-19 infections is showing positive results.

Yesterday, Health Director-General Datuk Dr Noor Hisham Abdullah said the number of daily positive cases have started to drop to double digits compared to the day before, a sign that the strategy to defeat the virus through the MCO was the right move to make.

In fact, the number of daily recovered cases is now 169, twice that of new cases recorded on Tuesday.

As Dr Noor Hisham said, the third phase of the MCO which enters the second day today is a critical period in determining the success of the efforts to fight Covid-19.

This success rate is not determined just by the number of experts and health facilities in the country, but also the public’s compliance with the MCO.

The result of this non-compliance only means that the measures taken by the frontliners including the Health Ministry, Royal Malaysia Police (PDRM) and the Malaysian Armed Forces (MAF) have been wasted.

According to the PDRM, during phase one and two of the MCO which lasted until last Tuesday, 14,922 people were detained for non-compliance.

It is was this recalcitrant attitude of the people which forced the government’s hand into imposing stricter action by dragging them to court after the RM1,000 compound previously imposed did not seem to deter errant individuals from violating the order.

Although these centres are academies, there will be no special food for these people who will be subject to the same regulations and laws as in normal prisons, so anyone who continues to violate the MCO should be prepared for them. – Bernama