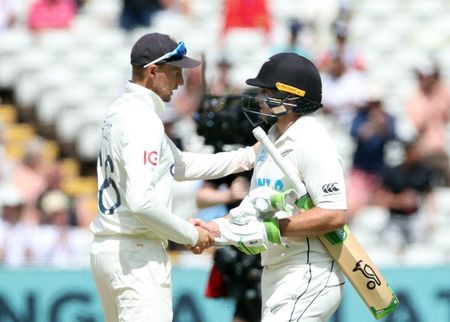 BIRMINGHAM, England (Reuters) – New Zealand crushed hosts England by eight wickets in the second and final test on Sunday to seal a 1-0 series victory after chasing down a target of 38 runs on the fourth day at Edgbaston.

The result meant New Zealand, who thoroughly outplayed the hosts in the match, secured a first test series win in England since 1999 and only their third overall in the country.

England had been reduced to 122-9 at stumps on day three with a slender lead of 37 runs and Olly Stone was caught behind off Trent Boult on the first ball of the day on Sunday, leaving the visitors on the verge of a famous victory.

New Zealand lost Devon Conway for three after the opening batsman fished at a Stuart Broad delivery only to edge it to James Bracey before Will Young (8) played a ball on to his stumps off Stone to leave the visitors at 33-2.

The first test at Lord’s was drawn.

New Zealand will now enjoy an extra day’s rest before they take on India in the ICC World Test Championship Final starting in Southampton on Friday.

(Reporting by Shrivathsa Sridhar in Bengaluru; editing by Clare Fallon)