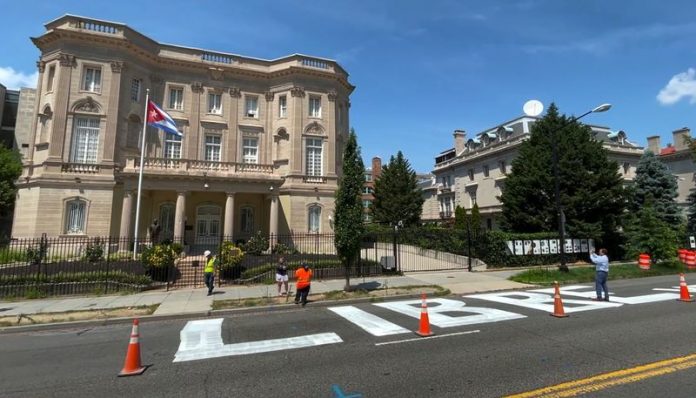 (Reuters) – “Cuba Libre” was painted in giant block letters on the street directly in front of the Cuban embassy in Washington on Friday following unprecedented protests on the Communist-led island last weekend.

The phrase – which literally means ‘free Cuba’ – has long been associated with both Cuban independence from Spain and later its 1959 revolution.

It was not immediately clear who was behind the giant lettering, whose format echoed the yellow ‘Black Lives Matter’ mural that was painted on a street near the White House in 2020 during U.S. protests against racism and police brutality. That section of street was later renamed officially ‘Black Lives Matter Plaza.’

Thousands of Cubans took part in protests over shortages of basic goods, curbs on civil liberties, and the government’s handling of a surge in COVID-19 infections, in the most significant unrest in decades in the Caribbean island nation.

In the United States, and especially in Florida which has a large community of Cuban exiles, demonstrators also staged protests, waving Cuban flags and calling for change.

In the wake of the protests, U.S. President Joe Biden called Cuba a “failed state” that is “repressing their citizens,” dashing hopes he could lift crippling sanctions any time soon that have contributed to the country’s worst economic crisis in decades.

Cuban President Miguel Diaz-Canel said on Friday the United States, not Cuba, was a failed state.

Will Smith slapping Chris Rock was the talk of the Oscars

Cricket: Cricket-Stokes to be unveiled as England test captain on Thursday – the Guardian

Work collectively to make sure calls for of Sabah and Sarawak are met as...